Wendi Kent photographs protesters for 'Faces of the Fight.'

As a clinic escort, documenting the actions of anti-abortion protesters comes with the territory.

Escorts like me volunteer our time to assist people trying to go into women’s health clinics, oftentimes amid graphic signs, shouting, and physical intimidation. It’s not uncommon to see protesters traversing the “bubble zone”—that is, the area around the clinic in which they are not allowed to cross—or even getting physical with patients and clinic staff. We take photos and videos for law enforcement in order to hold protesters accountable for unlawful behavior.

One photographer, however, is taking photographs of anti-choice protesters for a wider audience. Wendi Kent of Madison, Wisconsin, has had her work published in Rolling Stone, Patagonia, Yes! magazine, and other outlets. For her ongoing project, Faces of the Fight, Kent is traveling nationwide to clinics in danger of being shuttered to bring attention to the tactics of anti-choicers and what their presence means for those who work at the clinic, those who seek it out for care, and those who live nearby.

Kent spoke with the Daily Dot recently about her passion for activism, how protesters thrive on anonymity, and what she has learned about anti-abortion movement while photographing its front lines.

The Daily Dot: What inspired you to photograph anti-choice protesters?

Wendi Kent: I’ve been doing reproductive justice work for about five years now, but focus primarily on abortion rights. In the winter of 2013, I saw After Tiller. In the film, the doctors describe how their photos, names, and other personal information have been shared throughout the anti-abortion movement. You can see this by a simple Internet search.

In the spring of 2014, a friend shared an image on Facebook. It was a “wanted” style poster with her full name, photo, and her occupation (“pro-choice journalist”) along with two others and their information.

I read comment after comment from colleagues and fellow activists on how common this tactic is. I thought, “Who are these people?! Why don’t we know their names, their faces, their license plate numbers and places of employment?” And then I started to read more and more [explanations] by people on the front lines—clinic escorts and abortion providers—about what the environment is like at their clinics. I’ve never seen any extensive photographic documentation of these protesters and their behaviors. I’d only ever seen the same half dozen stock photos which were mainly of the graphic signs they hold, not of them or what they do.

I decided that had to be remedied. In this day of social media, images are shared in a heartbeat. I thought that if some images back up what is being written, people might be more inclined to pay attention. 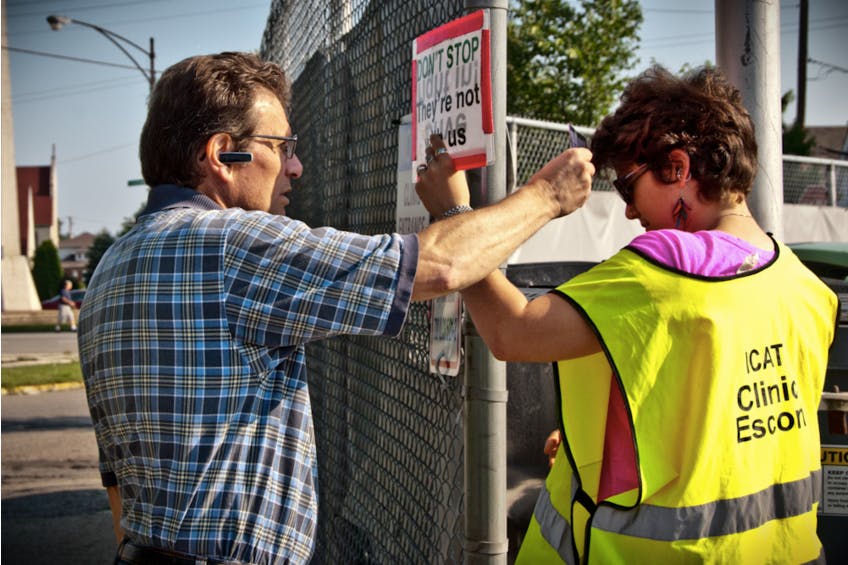 How did you select the clinics to photograph?

The first clinic I photographed was actually a collaboration. Robin Marty was talking about her project Clinic Stories [a longform journalism series about 12 different clinics] and I mentioned that I wanted to start photographing these clinic protesters across the country. She needed photos for her Chicago piece, so we teamed up.

After that one, I was positive I had to keep going and follow through with the project. The things I saw and people I met demanded it. I then made a contact with a clinic escort in Milwaukee and talked them into letting me come by. It was a big day—Good Friday of 2014—so I was really curious what they would do in the environment.

After those, I have relied solely on friends and colleagues to connect me with other clinic workers and volunteers. I tend to be interested in covering clinics that are most at risk of being shuttered but will cover any clinics I can. After all, anti-abortion protesters don’t discriminate—neither will I. I’ll go wherever they are. If women are being harassed, I want to be there. If doctors are being harassed, if escorts are needed, I want to be there. I want to show that this stuff doesn’t only happen on “special” days like Good Friday or the anniversary of Roe [v. Wade]. It happens all the time, day after day, week after week. It doesn’t only happen at a few clinics like the one in Colorado Springs, [Colorado], or in Wichita, [Kansas]. It happens outside hundreds of clinics across the country. It even happens outside of clinics that don’t even provide abortion care.

I rely on my connections at these clinics because it is really important to me that everyone understand my goals for the project and that I can be entrusted to respect the privacy of patients and anyone else who needs it. I keep records of who is fine with their face being shown and/or their names being used so when I photograph, I do so in a way where this privacy is retained while still capturing the protesters’ [faces] and their actions.

They yell at me for invading their space and their privacy, which frankly, is hilarious. I think they rely heavily on the anonymity to keep the support they do have.

What do you see as your role in the reproductive justice movement? How does this project contribute to that?

I consider myself an activist and sometimes, an [educator] … I guess I feel like my role is to be myself, which is loud, tenacious, and caring. While a lot of times I feel defeated and wonder if anyone is listening, I kind of can’t stop. I have three daughters and even if I didn’t, I care too much about people to be idle.

I have art and passion. I believe art moves people and people move people. And when people can actually put faces to those who are being hurt, those who are being traumatized, maybe something will change. It’s one thing to read about someone’s tears and fears, but it’s another to see them. It is difficult to deny this environment exists when you have the faces of those involved, looking right at you.

Is there one photograph of an anti-choice protester that you particularly want folks to see?  Why?

There’s a photo I took in Chicago. It’s of a man they know as the “license plate taker.” It may not be particularly moving or dramatic at first but I think once it soaks in what is really happening in this photo, people’s hearts sink.

I have a photo of the companion of a woman confronting a protester outside a clinic in New Jersey after the protester yelled at him. His baby had developed with no spine, so the father was emotional and this guy was just poking him. That was intense and painful to watch and I got a photograph of it.

… [W]hen you see a photo of this everyday-seeming man, standing in the blazing hot sun outside the gate of a clinic, with a giant binder in his arms, you really have to take a moment to let that sink in. This man records names, descriptions, license plate numbers, and whatever else he thinks is pertinent. He stands there and he writes it all down in his binder organized with tabs and dividers. He shares this information with other protesters to figure out where patients and the clinic staff live. They try to catch women on their way into their second visits so they can yell at them about “reversing” the [pregnancy termination] procedure. How can you look at a photo of this man and think what he is doing is OK? That it’s not creepy? That it’s his right? You just can’t. 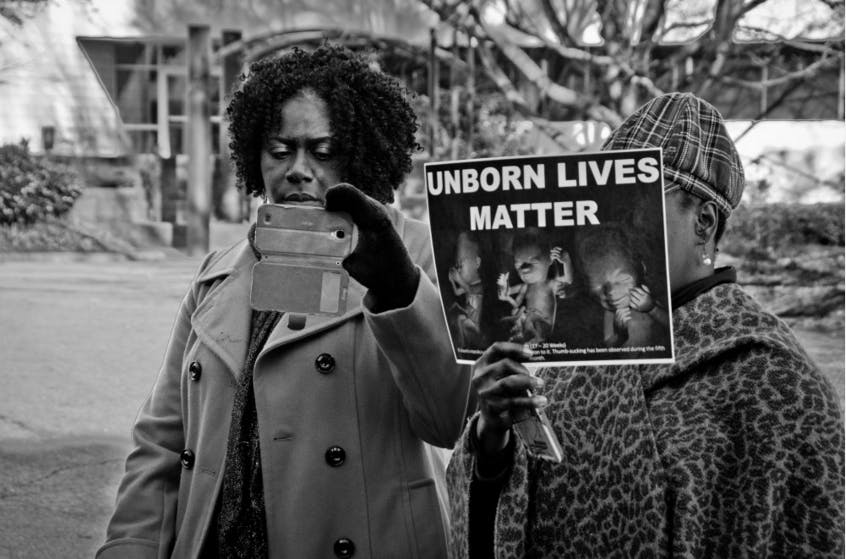 A Woman’s Choice in Raleigh

I’m wondering that you think about your photographs drawing more attention to the protesters. Why do you think it’s important to see them in action?

Some people may [believe protesters] shouldn’t get the attention and that that is what they want, but I can tell you that it’s not. Not for most of them, anyway. If they are getting photographed and reported on by anyone other than those within their movement, they usually want no part of it.

The majority cover their faces, get angry and standoffish when I photograph them. Many have tried to turn it around once they know I’m not going anywhere and get aggressive with me. Many have photographed me, they film me a lot and ask me who I am. They yell at me for invading their space and their privacy, which frankly, is hilarious. I think they rely heavily on the anonymity to keep the support they do have and their ability to draw more people into their movement. Because, really, when you see what they do, the majority of Americans just don’t approve.

It’s a lot easier to deny something is happening if there are no images proving otherwise. I want to take that power of anonymity away. Stripping them of that makes them vulnerable and it makes the point they are trying to make vulnerable. When you have to resort to terrorism to convince people you’re on the right side of things, well, you probably aren’t. In the end, I think any reasonable person can look at these images and say, “It doesn’t matter what I think about abortion, no one deserves this.”

It’s a lot easier to deny something is happening if there are no images proving otherwise. I want to take that power of anonymity away.

What have you learned about anti- choicers while photographing them?

I have been really surprised at how secretive [anti-choice protesters] are. I thought they would be really proud of the work they do and smiling and want to talk to me but they hide and shoo me away. … I feel like the history of violence suggests that’s a smart idea. There’s been no evidence of violence toward pro-life groups in the history of this struggle so they have no reason to be secretive. I also have learned about the struggles between the different pro-life groups, which I find really interesting.

What more would you like to happen with Faces of the Fight?

I hope that it inspires med students to seek out abortion education and training. I hope it encourages people to volunteer to escort, to talk to their family and friends about what is happening. I would like to see more people asking what they can do to change this. I would like people to share these images and say, “Abortion is a personal decision and no one deserves to be bullied.” I hope this encourages friends and family to support the women and girls in their lives who seek abortion care. I hope that it shows the anti-abortion movement that bullying and terrorizing simply isn’t acceptable and it will no longer be tolerated.