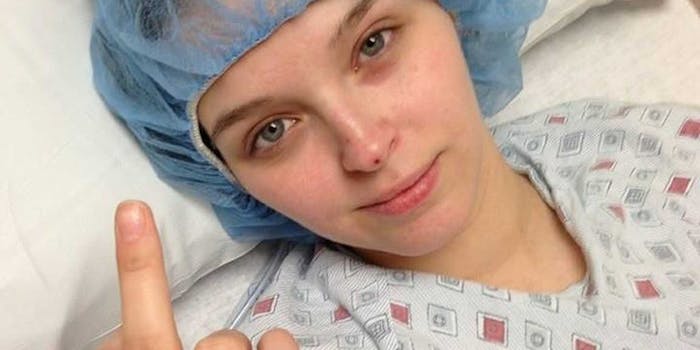 The real story behind this viral Planned Parenthood photo

Ambarie Schiefer had good reasons for giving the bird.

Planned Parenthood saved Ambarie Schiefer’s life. So when people began demanding the organization be defunded, she voiced her opinion with a simple, but provocative gesture: by flipping them off.

Schiefer posted a photo of herself—in a hospital gown and flipping the bird—onto Facebook on Sept. 18. Underneath her pic, Schiefer explained it was originally taken in 2013, minutes before she went into surgery to remove the larger portion of her cervix. 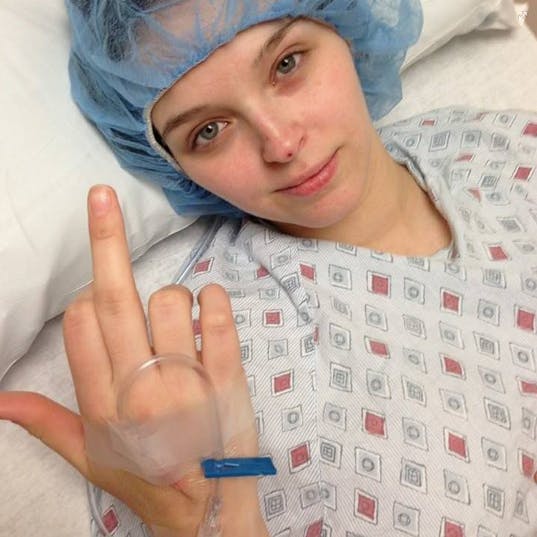 November 7th 2013. At the age of 23, I had surgery to remove part of my cervix to avoid my abnormal cells becoming cancerous. The middle finger I proudly hold high here was a preemptive “fuck you” to any and all who want to make it damn near impossible for someone such as myself, without insurance, to find out that I needed such a surgery and then make it possible for me to get that very important surgery. Without Planned Parenthood, I don’t even know where I would be now. I thank them, and thank everyone who supports and believes in them. Thank you. #IStandWithPP

Schiefer underwent her surgery at Magee Women’s Hospital in Pittsburgh. But it was the screenings at the Downtown Pittsburgh Planned Parenthood of Western Pennsylvania that revealed the irregular cells in the first place and led to her potentially life-saving procedure.

Prior to her fateful screening, Schiefer had a long history of using the organization for affordable reproductive healthcare. “I started going [to Planned Parenthood] when I was 17 just for birth control and basic exams. Having no insurance, I was lucky enough to qualify for the ‘select plan for women’ that they offer,” Schiefer explained to the Daily Dot in an email. “I have worked six days a week since I was 17, and I always made too much to qualify for public assistance, but too little to afford insurance. So without the select plan, I never would have been able to receive any of the care that I needed, even before my cervix decided to turn on me.”

Now 24 years old, Schiefer continues to use Planned Parenthood for general health services, which make up a majority of what it does. (Only 3 percent of all health services at Planned Parenthood are abortion services, according to its website.) But the health centers and abortion have been inextricably linked, and Schiefer’s photo and public support have branded her a “baby murderer.” For example, one commenter on her photo wrote “PP might of helped save yours [life] but they take millions. How about equality for all?”

“Unfortunately, a lot of people see a photo of a woman and the words ‘Planned Parenthood’ and just assume ‘abortion’ because their minds seem incapable of much else other than ignorance and hatred,” she wrote the Daily Dot.

In addition to the “colorful names” she’s been called by abortion opponents, her photo and story have been widely shared with incorrect information about her procedure and about the circumstances surrounding the photo.

“The photo itself was not a ‘selfie’ taken specifically as a ‘f*ck you’ to ‘The Republicans,’ as the articles written without my consent have stated,” Schiefer wrote the Daily Dot. “It was taken right before my surgery as a general ‘f*ck you’ to be used when the time was right. I feel that I saved it for the right time.”

Some other posts implied that Schiefer had the actual procedure done at Planned Parenthood, when in reality it was just screenings there which lead her to the surgery at Magee Women’s Hospital.

Even after making it abundantly clear why Planned Parenthood’s services were so crucial for her, commenters still asked why she didn’t get insurance via the Affordable Care Act.

“Even if I had had Obamacare, after paying the insurance bill every month, I wouldn’t have had money to pay for any appointments or services or prescriptions that I needed,” Schiefer explained. She also explained that she didn’t want to leave her doctors at Planned Parenthood, who had taken care of her every step of the way. She continued:

“They explained everything that I needed to do, who I needed to call, and what was going to happen from there. The doctors and staff at Planned Parenthood never once made me feel anything but comfortable and protected and never judged. They really do want to help in any and every way that they can.”

Still, Schiefer doesn’t have any regrets about sharing the important moment, even with the tornado of misinformation and criticism by strangers.

“Sure, I’ve been called a ‘stupid liberal bitch’ several hundred times lately, but oh well,” Schiefer wrote. “I got at least a few people whom I’ve never even met to open up about their own experiences, and that more than makes the senseless hate worth it.”