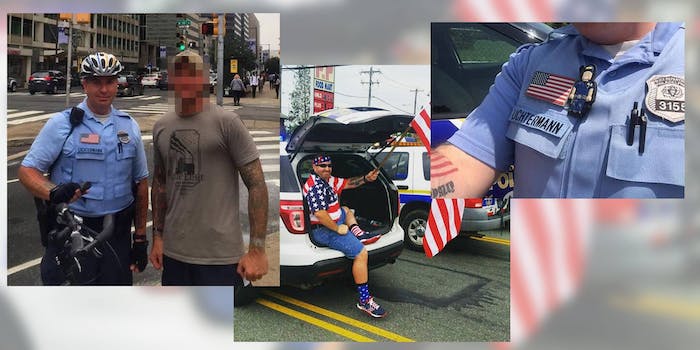 Hans Lichterman was spotted patrolling black protests at the DNC.

On Thursday, photos surfaced on Twitter of a Philadelphia police officer with a forearm tattoo of the Nazi Party’s Parteiadler emblem.

The Philly cop, Ian Hans Lichterman, is the same one whose name was listed on a 2010 hacked database of neo-Nazi and white supremacist website users, according to neo-Nazi exposé website One People’s Project. Photos of Lichterman dressed in Nazi uniform also surfaced, showing the officer participating in a reenactment ceremony of sorts. 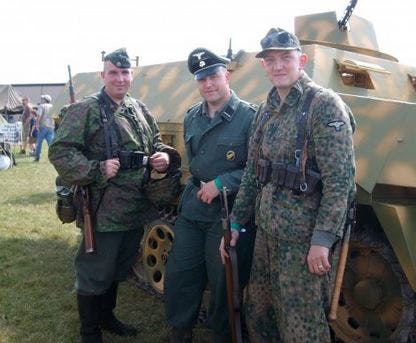 According to the anti-fascism activist network Philly Antifa, Lichterman was exposed by the hack as a member of Blood & Honour, a racist skinhead group (related to Volksfront and Hammerskins) that the Southern Poverty Law Center lists as an extremist group. After Lichterman’s name was among those leaked, reported blog Philly Antifa, he left the police force and went into private security.

However, Hans Ian Lichterman is back on the Philly police force today.

On Thursday, the Philly Voice discovered that Lichterman is currently listed on city payroll records as a police officer.

The Daily Dot emailed the Philadelphia Police Department’s press office on Thursday morning to confirm Lichterman’s employment status and whether an investigation might be underway, but did not immediately receive a response.

After the photos of his Nazi tattoo went viral on Twitter, Lichterman began to rapidly delete his social media accounts, including Instagram and Flickr—where his handle was “Panzerhund0311,” a reference to the Nazi Panzer tanks used in World War II and the 0311 Marine infantry code for a rifleman.

But the Daily Dot encountered some of Lichterman’s photos in which the officer showed off his collection of German police regalia and posted a disturbing parody of the popular “Coexist” bumper sticker. 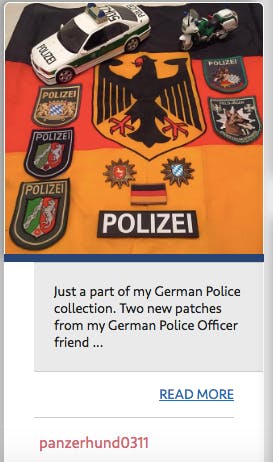 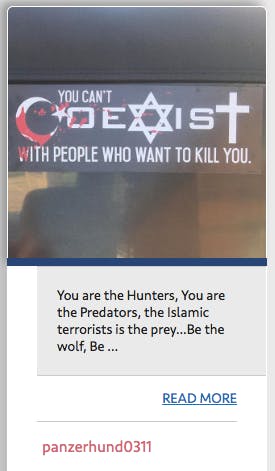 Not only is Lichterman still on the Philadelphia Police force, but the photographs of his Parteiadler tattoo were allegedly taken during a #BlackResistance march that the Daily Dot covered during the Democratic National Convention. According to Facebook user Evan Parish Matthews, Lichterman was assigned to patrol on a bicycle during the event.

Matthews said that Lichterman was one of about 100 officers who blocked the march from proceeding down a major avenue. The Daily Dot’s coverage of the event noted that it was unusually heavily policed, with officers seemingly outnumbering protestors and dozens of police vans waiting to be filled.