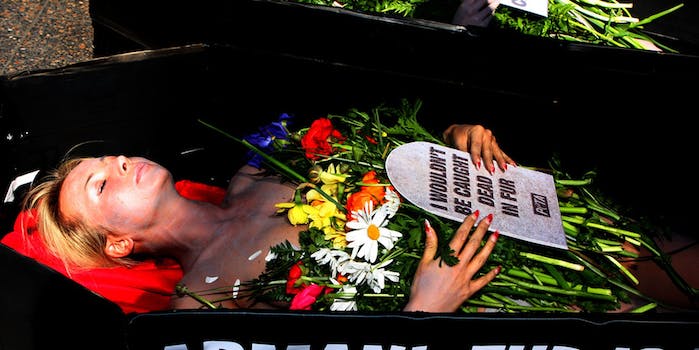 Is PETA beyond parody?

In many ways, the animal rights organization seems more like a group of well-organized trolls than anything else. Its campaigns regularly stir up enough controversy that many Twitter users are finding it impossible to tell the difference between a parody account named @PETA_UK (“People for the Eating of Tasty Animals”) and the real thing.

One recent campaign parody is related to PETA’s suggestion that dairy products are linked to the onset of autism in young children. Just to be clear, the following poster is from PETA’s actual website, not the @PETA_UK account.

Would you let your toddler smoke? No, but you would happily poison them with milk and cheese. Time to change! #autism pic.twitter.com/cWMM8gt3E7

The poster is a play on the “Got Milk?” slogan, and has already been labeled as scaremongering, with many people coming forward to debunk PETA’s theory.

@PETA_UK started posting fake tweets from this campaign, picking fights with naysayers in a parody of PETA’s famously controversial attitude. Since then, the account has started tweeting about Australian artist and entertainer Rolf Harris, who is on trial for allegedly assaulting several underage girls.

If Rolf Harris is guilty his record as an animal rights campaigner should be taken into account in his sentence pic.twitter.com/fEHuna8gub

@PETA_UK You are a disgraceful. If #RolfHarris is found guilty, his charity work should mean NOTHING when sentencing him. Can’t believe you!

@PETA_UK You guys are morons to bring animals into it.Hitler loved dogs. Loving animals means nothing if you’re deliberately evil to humans

Being fooled by parody accounts is nothing new, although @PETA_UK’s Twitter bio does make it extremely obvious that it isn’t the genuine article. It’s also not very good satire, since it basically relies on enraging people on hot-button topics so they react without bothering to check if the account is real.

Still, @PETA_UK does succeed in one way: by highlighting PETA’s increasingly terrible public image. After years of shock-value protests and purposefully offensive advertizing campaigns, PETA has reached the point where it is virtually indistinguishable from an internet troll.