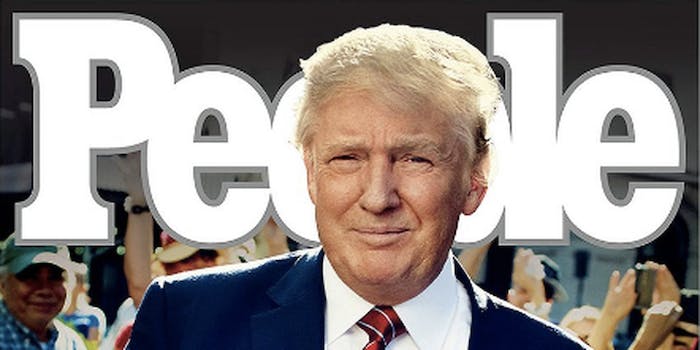 Women are boycotting ‘People’ magazine for pandering to Trump

The publication appears to have forgotten the sexual assault allegations made by its own writer.

It isn’t odd for a publication to print features or feel-good stories on the president-elect. But it is, at best, a little insensitive to publish a number of cutesy “He’s hired!” and “Will the house be gold?” social media headlines after one of your writers has accused the man of sexual assault.

In October, People writer Natasha Stoynoff  wrote a piece for the magazine detailing how then-presidential candidate Donald Trump had allegedly sexually assaulted her while she was on assignment to profile him in 2005. She claims he pushed her against a wall, shoved his tongue down her throat, and kept telling her they were destined to have an affair. In the week she made those allegations, over a dozen other women came forward with similar predatory stories about Trump.

People‘s sudden disregard of Stoynoff’s and the other women’s allegations in the dawn of a Trump presidency is why many are calling for a boycott of the magazine.

The boycott is emblematic of women’s general frustrations of living in a culture that continually dismisses sexual assault claims. Not only are they often ignored or dismissed or never brought to trial, but the men who have been accused of committing such violent acts are often let off the hook or, in some cases, rewarded. The election of Trump is a testament to that.