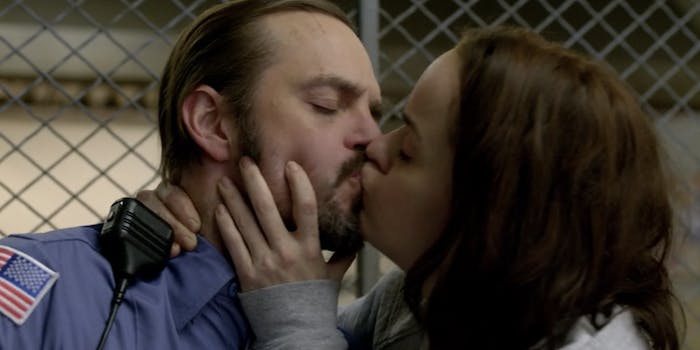 Pennsatucky went back to her rapist—and the sad truth is countless other survivors do, too.

Last season in Orange Is the New Black, former fundamentalist Tiffany “Pennsatucky” Doggett (Taryn Manning) grew close to Officer Charlie Coates (James McMenamin), the prison guard she was would spend hours with while on van duty. Nerdy, shy, and sensitive, Coates felt different than the other correctional officers at Litchfield. The two shared an easygoing, playful rapport that quickly developed into a mutual crush, one shared over illicit donuts from the pastry shop where Coates used to work. 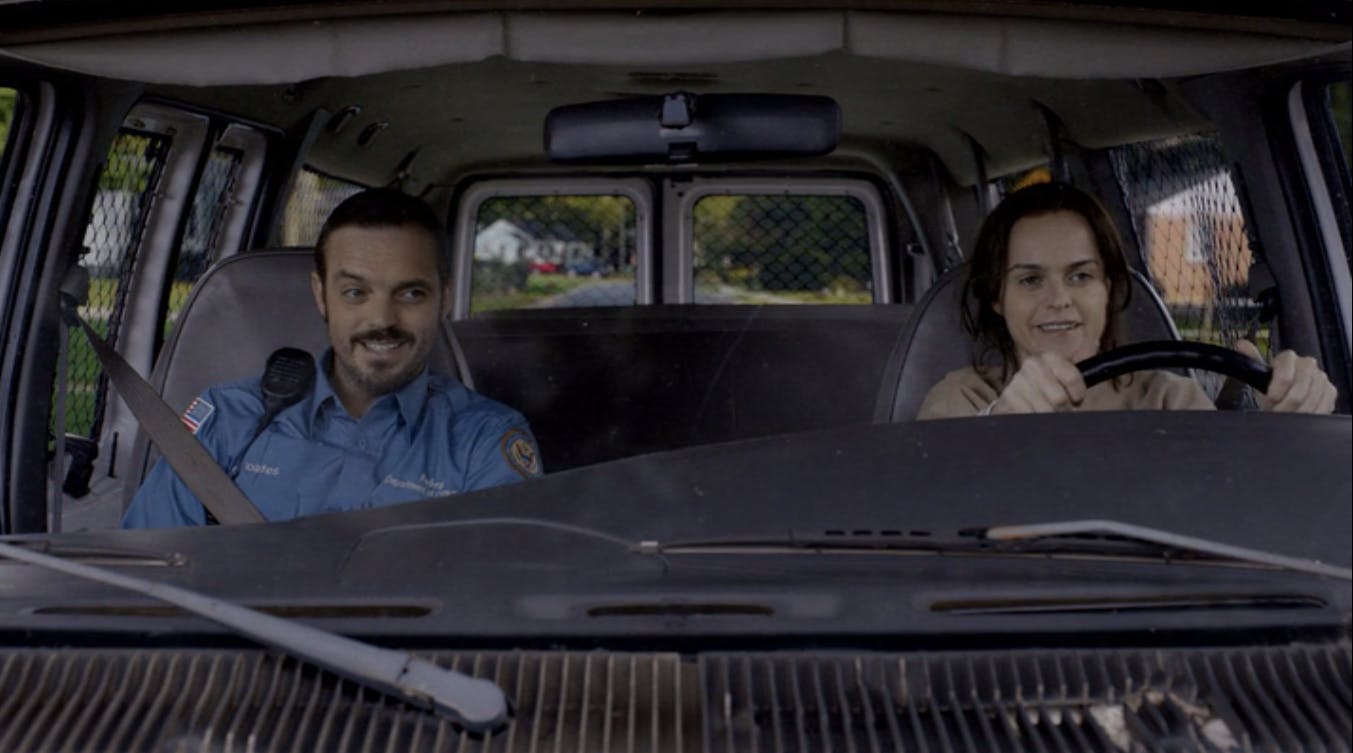 It wasn’t long, however, before that burgeoning romance turned startlingly violent. During one of their trips, Coates threw a donut in the dirt, telling Pennsatucky to pick it up with her mouth—like a dog. “I said, ‘Fetch,’ inmate!” he barked. Just seconds later, Coates aggressively pushed her to a tree and kissed her as she looked away. Pennsatucky’s face, empty of emotion, was the look of a woman resigned. She was aware that in prison—like in life—power favors the men who control the gates.

After another one of their donut runs, Coates returned to the prison late and was suspended. He blamed Pennsatucky for the punishment—and decided to punish her back. “This is what you wanted, isn’t it?” Coates repeatedly asked, as he threw her in the back of the prison van, a single tear streaming down her face. The camera held on Pennsatucky’s face as Coates confessed his feelings mid-assault: “I love you, Doggett. I love you.”

And yet a season after being raped by the one man in Litchfield she trusted, Pennsatucky does something unexpected: She hints that she may go back to her abuser.

Throughout the course of the current fourth season, Pennsatucky slowly grows closer to Coates, defending their friendship to her top confidante, Big Boo (Lea DeLaria), who would prefer to see him prosecuted. Pennsatucky, though, is more forgiving. She empathizes with him and misses being friends. “Toast can’t never be bread again,” Pennsatucky says while consoling an also-forlorn Coates. “But I like talking to you.”

She proceeds to grab him and kiss him, but he pushes her away, telling her that she should keep her distance. “Are you still scared of me?” he asks. “You should be.” Their future is left an open question—one that will likely be explored next season. 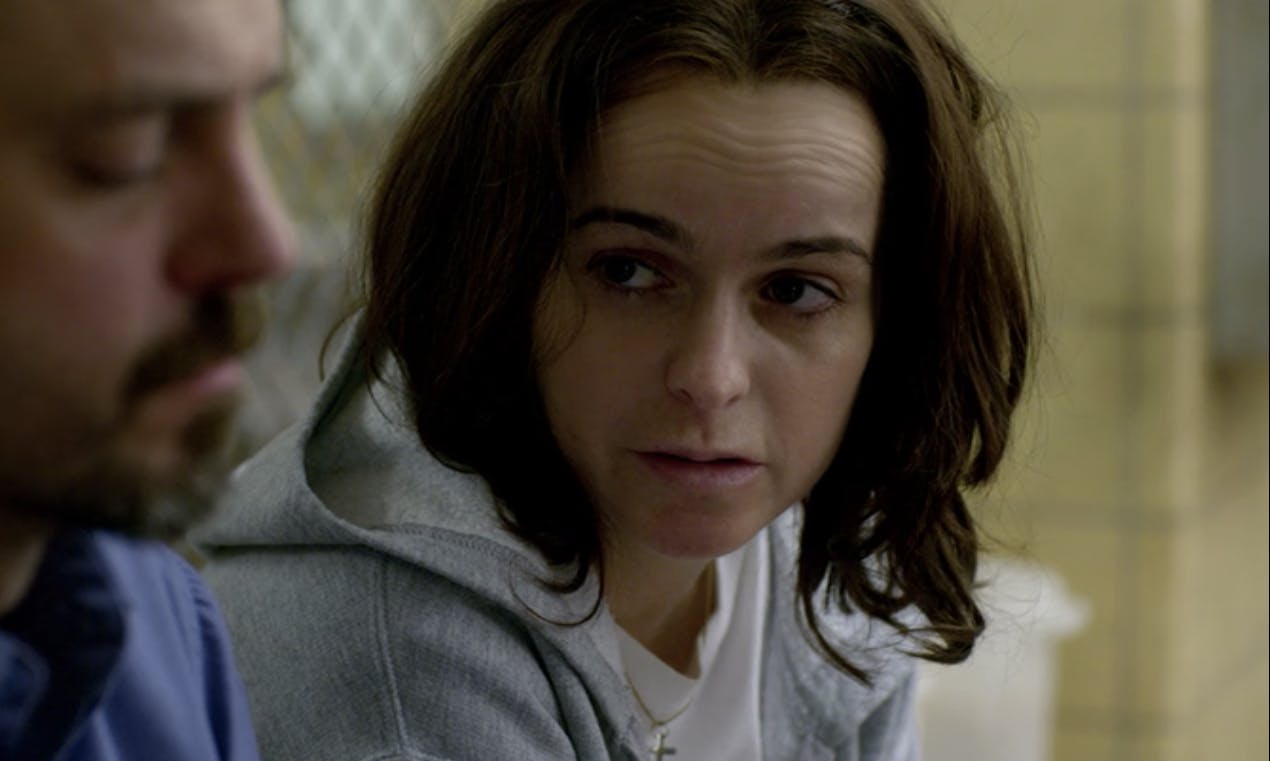 Screengrab Orange Is the New Black/Netflix

That moment might seem shocking, but unfortunately, this is the norm for many survivors of abuse and sexual assault. Statistics from the National Domestic Violence Hotline show that victims will attempt to leave their abuser an average of seven times before they are successful; many women, though, choose to stay.

In response to the Janay Palmer-Ray Rice abuse scandal two years ago, domestic violence survivor Beverly Gooden started the #WhyIStayed hashtag on Twitter to highlight the structural barriers that women who are physically and sexually abused in relationships face. Gooden wrote that in her own case, making the decision to leave was “a process, not an event.” She continued, “And sometimes it takes awhile to navigate through the process.”

Gooden tweeted about the many factors that caused her to stay in a toxic, violent relationship—he physically blocked her, she had nowhere to go. But this one rings especially true in Pennsatucky’s situation: “I stayed because I was halfway across the country, isolated from my friends and family,” Gooden said. “And there was no one to help me.”

There are numerous other reasons women might stay. Some stay out of love, the hope that their partner may change. Many abusers promise their victims that it was just a “one-time thing” or that it won’t happen again. Things will be different next time. For others, staying is rooted in the fear for your life: 75 percent of those who are murdered by an intimate partner were killed attempting to leave the relationship.

“In Pennsatucky’s case, she physically cannot leave: She’s in prison, and her rapist is in charge of her custody. She has to see her abuser nearly every day.”

In addition, low-income women are disproportionately likely to be the victims of physical or sexual assault in a relationship—by up to five times that of a woman who makes more than $50,000 a year.

These realities show that many of those who stay in abusive relationships feel as though they are trapped—whether that’s socially or economically. But in Pennsatucky’s case, she physically cannot leave: She’s in prison, and her rapist is in charge of her custody. She has to see her abuser nearly every day.

For Pennsatucky, choosing to forgive her rapist—and leave the door open to a future relationship with him—is a difficult, complicated decision. In the previous season of Orange Is the New Black, Big Boo helps Pennsatucky get revenge on her abuser, conspiring to tie him up and sodomize him with a broomstick. At the last minute, Doggett decides she can’t go through with it. “I’m not angry,” she says. “I’m just sad.”

However, Big Boo warns her, “If you go back to giving that maggot the time of day, I swear to fucking God, Doggett, I’m done with you.”

Pennsatucky doesn’t need an ultimatum. She needs support, and it’s extraordinary how far Orange Is the New Black is willing to go in depicting her journey. In a barnburner of an essay for Vulture, Jada Yuan claims that the problem with shows like Game of Thrones, in which rape is about as common as the letter “e,” is that they use rape as nothing more than a plot point, discarded by the next episode. When Sansa Stark was raped by Ramsay Bolton on her wedding night, the focus wasn’t on her pain.

“We heard only her screams as the camera panned away to the horrified reaction of a male bystander, Theon Greyjoy,” Yuan writes.

But what Orange Is the New Black has done, unflinchingly so, is continue to hold Pennsatucky in its gaze, depicting the lived realities of rape survivors, even if those truths make us cringe. If Pennsatucky goes back to Coates next year, the saddest part is that countless survivors make the same decision every day.