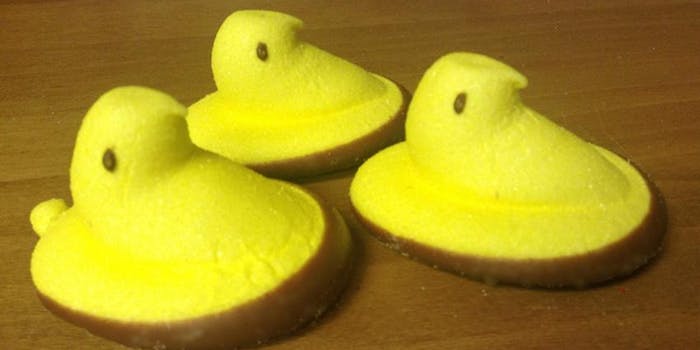 Peeps-flavored milk is a thing, and it sounds repulsive

The spring treat is being turned into a milk flavor, and Twitter isn't happy about it.

Nothing says Easter like the marshmallow-flavored chickadees better known as Peeps. So what could be better than adding a little bit of Peeps-inspired flavor to our daily dairy intake?

The limited-edition Peeps Milk will debut on supermarket shelves in the Midwest. But given its caloric content, it’s unlikely the product will make its way into school lunchrooms. According to the nutritional label, Peeps Milk packs 37 grams of sugar per cup, which is more than three times the amount of sugar in a typical cup of whole milk. (It’s only slightly less than the amount of sugar in a bottle of Coca-Cola.) But heck, everything in moderation. Right?

On social media, the reaction to Peeps-flavored moo juice has been mixed. Many health-conscious consumers are scoffing at the introduction of yet another sugary beverage, which is being targeted at kids and adults alike.

People concerned about diabetes are appalled.

Those concerned about America’s obesity epidemic are similarly skeptical.

Ugh, I can actually hear you getting fatter, America. http://t.co/LX1lMlwpJQ

#America has come up with plenty of gross food concoctions, but #peepsmilk? Over the line!http://t.co/n3YyYF5Tit pic.twitter.com/6QCYveHlnI

But fans are ready to dive in, mouth first.

The Peeps brand has been around for more than 60 years, and it shows no signs of slowing down. The marshmallow treats are deeply embedded in pop cultural consciousness, to the point where they’re about to be the subject of a new movie. So it might be a little late to stop the Peeps brand from expanding into other markets: The chick, as they say, is already out of the barn.