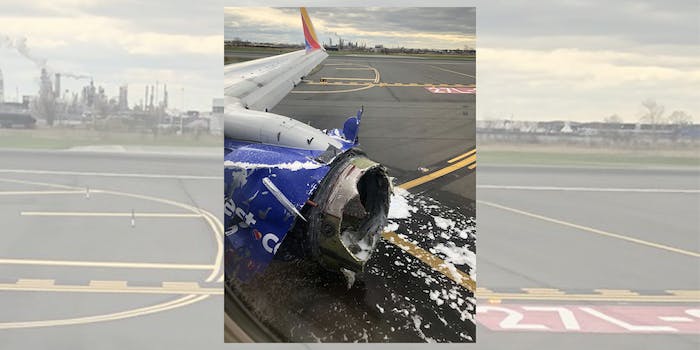 Another passenger livestreamed the incident.

One person was killed Tuesday after Southwest Airlines flight 1380 suffered an engine failure and was forced to make an emergency landing at Philadelphia International Airport, the Washington Post reported.

National Transportation Safety Board officials confirmed that the flight had “apparent in-flight engine failure of the left engine” and that it will investigate the incident. Gruesome details from the flight have emerged via local media reports and passengers’ social media posts.

The father-in-law of one passenger said that as the engine failed mid-flight, a female passenger was partially blown out of a broken window before being “pulled back in by other passengers,” according to Philadelphia’s NBC affiliate.

In the caption of the video, Martinez writes about the broken window:

Flight attendants ran over calling for passengers to help cover the hole as they broke down and began uncontrollably crying and looking horrified as they looked outside. Plane dropped dramatically and it smelled like fire with ash coming down on everyone thru the vents. Absolutely terrifying, but we are okay.

Another video Martinez posted shows passengers during the terrifying minutes before the flight landed.

According to passenger accounts and the Philadelphia fire department, one person was sent to the hospital with a critical injury after the plane landed and may have suffered a heart attack during the flight. Seven others were also injured, the Post reported.

“We are in the process of gathering more information,” Southwest said in a statement. “Safety is always our top priority at Southwest Airlines, and we are working diligently to support our Customers and Crews at this time.”

Philadelphia Fire Commissioner Adam Thiel said when firefighters reached the plane after it landed, one engine was on fire, and the plane continued to leak fuel after the fire was extinguished.

“It’s our understanding that the passengers on board the aircraft, in addition to the flight crew and the cabin crew, did some pretty amazing things under very difficult circumstances,” Thiel said.

@SouthwestAir I want to thank the crew of SWA 1380 for a great job getting us to the ground safely after losing in engine #angelsinthesky pic.twitter.com/QL0YPUp0Vj