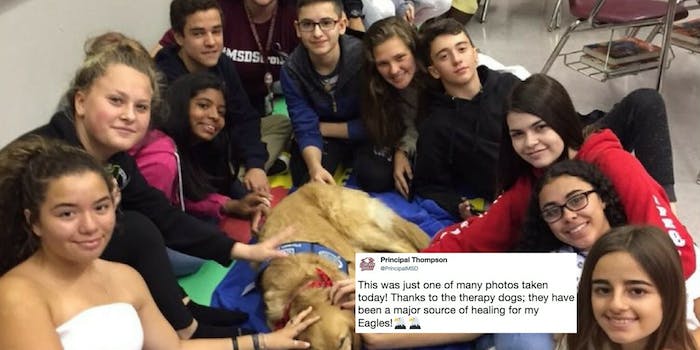 Students were greeted with support and therapy animals.

For students at Marjory Stoneman Douglas High School, the site where 17 died at the hands of alleged mass shooter Nikolas Cruz, Wednesday was the first time many set foot in their classrooms in the two weeks since the shooting.

In the days leading up to the Parkland survivors’ arrival, high school principal Ty Thompson shared the faculty’s preparations on Twitter, writing that Wednesday’s focus would be on “emotional readiness,” not curriculum.

For several of these students—such as Emma González, whose tearful speech launched her and her peers’ movement March For Our Lives into virality; David Hogg, whose activism has been berated by right-wing conspiracy theorists, among them Infowars “truther” and mass-shooting denier Alex Jones; and Cameron Kasky, who held Florida Sen. Marco Rubio accountable at a CNN town hall for his donations received from the National Rifle Association—this day is exactly what they needed.

We send you thanks from my entire staff: that’s me at the top offering my hugs to the world! Thank you, we are #MSDStrong and check out that rainbow this morning! pic.twitter.com/RCXNMYSy1K

Several students prepared for the day back with a dose of inspiration from Marjory Stoneman Douglas herself, a suffragette who encouraged to “be a nuisance where it counts,” as well as inspiration from fellow students.

Matt Deitsch, an MSD student, shared a poem written by his sister and fellow student, 15-year-old Samantha, about the day of the shooting and the subsequent death of her friend Jamie Guttenberg, one of the 17 people killed.

Just a little reminder before we go back to school tomorrow ❤️ #NeverAgain #MarchForOurLives pic.twitter.com/TBCc2wlvLg

My sister turned 15 the day of the shooting.. She has had a hard time finding her voice in all of this and asked me to share this poem with you.

On the night before my sister returns to MSD, It would mean a lot if you could read her poem.#NeverAgain pic.twitter.com/3O4Z1knIuv

Activist Kasky prepared for the day and followed up by sharing his feelings of excitement and love on Twitter.

I’ve never anticipated a 6:00 AM alarm more in my entire life.#Positive #Passionate #PROUD TO BE AN EAGLE

Douglas is amazing. It’s hard to think about the 17 empty seats that will never truly be filled again, but Stoneman Douglas filled them with love today.

Others reckoned with the idea that, despite this return to normalcy, nothing will be the same again. Several mourned the loss of Aaron Feis, an assistant football coach who died shielding students from gunfire. Students recalled waving to Feis every morning as he greeted them on their drive into the senior parking lot.

I pray that today is the beginning of our long and difficult journey from grief, sorrow and anger to a new consciousness of hope, compassion and love. Thank you to our young people for leading the way. Welcome Back! #MSDStrong #NeverAgain pic.twitter.com/ytCNfMxwSe

The door I used to walk through every day now covered in a memorial. Welcome back, eagles. pic.twitter.com/ylJhp0gaAk

I waved to Coach Feis every morning when I drove into the senior lot, yet I didn't even know his name until he died. Today, after 4 years, I asked my crossing guard her name. Please let the people around you know how thankful you are. Thank you Coach Feis & thank you Barbara❣️

And then, there was the “emotional readiness,” with students on campus tweeting about the support they received on their first day back—including cookies and therapy animals (like a goat!).

A three legged greyhound just came into my class. I’m in love.

These dogs are so freakin helpful I’m in love pic.twitter.com/adxHvviRmR

The only thing getting me through today are the dogs. pic.twitter.com/IyPvOYcQ3b

This was just one of many photos taken today! Thanks to the therapy dogs; they have been a major source of healing for my Eagles!🦅🦅 pic.twitter.com/s6pRKDEuAq

And while the students’ return to normalcy meant easing back with some semblance of comfort, politicians such as Tallahassee, Florida Mayor Andrew Gillum and Democratic Florida Sen. Bill Nelson recognized this was no “day off” from the students’ original call—to prevent a mass shooting like this from ever happening again.

There are some of us who choose to fight the NRA instead. Best wishes as you return to school today.

Thinking of everyone at Marjory Stoneman Douglas as they return to school today. Your courage and determination in wake of this tragedy has been tremendous; and we are all with you as you return to class today. #NeverAgain