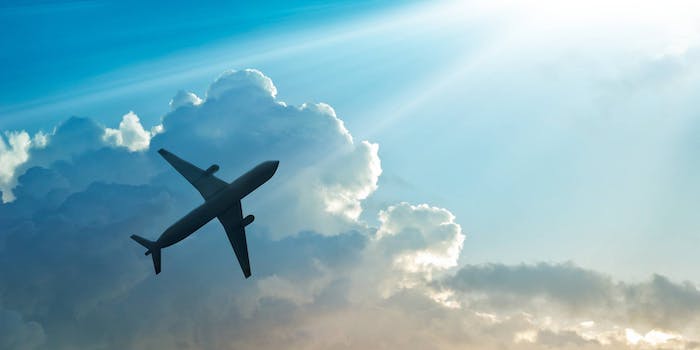 There are a few rules of air travel that most people, even if they’ve never been on a plane, intuitively understand. Share the armrests. Be nice to the flight attendants. You can take off your shoes if it’s a long flight, but for the love of god, don’t also take off your pants and then sit with your feet up on the wall in front of you as your boxers slide dangerously high on your thighs.

One guy didn’t get the memo on the last one.

Comedian Kumail Nanjiani tweeted that horrible image, noting that while it was a 5.5 hour flight, this man’s pants came off in the first 20 minutes. Others pointed out that the man is wearing a wedding ring, meaning someone decided to permanently attach themselves to this dude and his habits. Apparently, after that, it only got worse.

In retrospect, it makes sense that this man is married. He has secured a mate and has no need to impress anybody by adhering to social mores. He possibly has kids, fulfilling the duty of the species, and can now spend the rest of his life reclined and pantsless, being shitty to service workers, and feeling entitled to making everyone uncomfortable around him.

Though we’re not sure if or why he wasn’t asked to put his pants back on, as a refresher, earlier this year a woman wasn’t allowed to board a plane because her short shorts were “not appropriate.” Perhaps if she had put on the shorts while on the plane, though, that would have been OK.