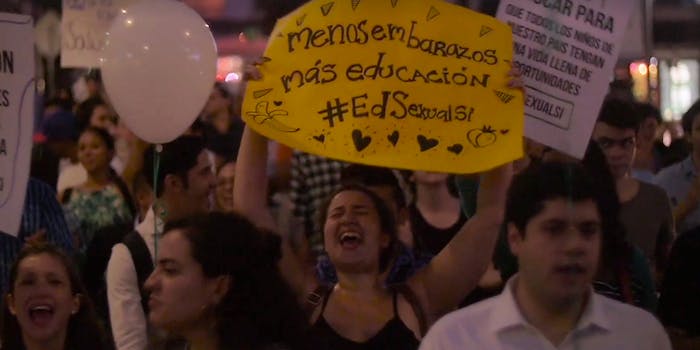 Panama is fighting to save teen lives through sex ed

Panama’s schools have often been described as the worst in the world, with students graduating without the basic skills needed for entry-level jobs. University of Panama education expert Elizabeth Petrovich de Molina told Reuters that fights between unions and government often bring any attempts at reform to a grinding halt.

Similarly, any attempt to bring sex education to classrooms often fails because of in-fighting among religious groups—Panama is 79 percent Roman Catholic, 17 percent Protestant. And recently, a proposal for Law 61, which would mandate sex ed in Panamanian classrooms, was sent back from legislature to committee after being stripped of references to U.N. guidebooks on the matter.

Normally, when sex-ed bills are sent back to the committee, they never resurface. But this time, the bill has popular support. The Panama News reports that 43 to 56 percent of the population is in favor of the law. And on July 25, a group of supporters marched down the Via Espana to raise awareness.

The bill comes at a time when Panamanian youth are facing a sexual health crisis. A 2014 article by the Newsroom Panama noted:

Statistics from the Comptroller General show that 75 percent of children born are outside of a stable relationship, and one in five of those births are to a teenager, while 70 percent of the fathers are over 20 and among those most affected by HIV/AIDS, and the third leading cause of death among adolescents aged 15 to 24 years is AIDS.

While there are some numbers that show the rate of teen pregnancies is declining, HIV infections still remain high, especially among Panama’s indigenous youth. The Global Burden of Disease Study 2015 found that HIV infection rates have increased in Panama over the past decade. And the Public Ministry of Panama reported that authorities have discovered an average of one dead baby in the streets each week since the beginning of 2016.

Supporters of sex ed in Panama are using the hashtag #EdSexualSi to draw awareness to the desperate need for reform. One of these voices is Lorena Castillo, the First Lady of Panama, who tweeted:

Which roughly translates to: “Because I am a woman, wife, mother, and Catholic, and want an informed youth, I do not want more pregnant girls, no HIV in my country.”