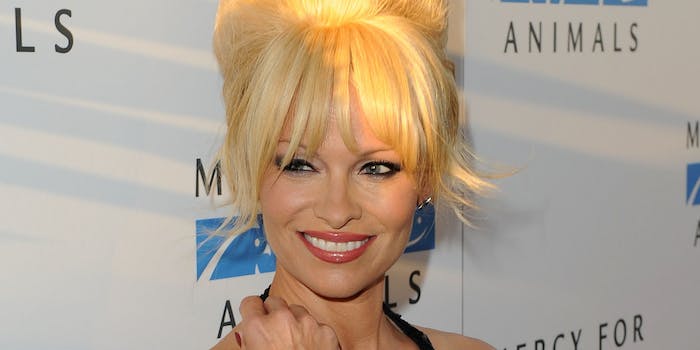 Mercy For Animals MFA/Flickr (CC BY 2.0)

Pamela Anderson is cured of hepatitis C, thanks to a new medication

The drug is still hard to come by for most people.

Supermodel Pamela Anderson announced in a bikini-clad Instagram post this Friday that she is cured of hepatitis C after a 16-year-long struggle.

Hepatitis C is a contagious viral liver disease that spreads through the blood, according to the Centers for Disease Control. Anderson contracted hepatitis C in 2002, claiming she got it from sharing a tattoo needle with ex-husband Tommy Lee. (Lee disputes this claim.)

In August, People reported that Anderson would soon begin a “FDA-approved drug regimen.” The supermodel said she always thought of her disease as “a death sentence,” but added it was possible to be cured within a month.

Several new treatments for hepatitis C have come on the market since 2011, according to Science. One of the newest medications reportedly cured individuals with hepatitis C after three weeks of treatment. The LA Times claims that Anderson took a drug cocktail which was approved by the FDA in 2014. However, the treatment is exceedingly expensive—around $84,000 for just one pill in the multi-pill regimen according to a different article in the LA Times.

The Viral Hepatitis Action Coalition estimates that hepatitis C infects about 17,000 people per year and that 3.2 million Americans are currently living with the disease, which can lead to cirrhosis of the liver and cancer if left untreated. The CDC said that sharing needles during intravenous drug use is one of the major modes of transmission, though many in the baby boomer generation contracted the disease from blood transfusions as well.

The Baywatch star acknowledged the steep price tag of her medication in her Instagram post, saying that she believes the treatment will soon be accessible to more people. Hopefully as Anderson says, the drugs will become more affordable  soon.

Photo via Mercy For Animals MFA/Flickr (CC BY 2.0)