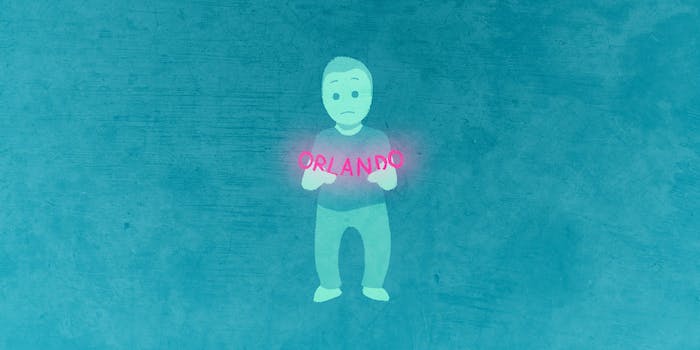 It's better that they hear it from you than from school or social media.

When Rev. Ann Kansfield heard about the shooting at Pulse nightclub in Orlando, she didn’t talk to her children about it. They are young after all, 7 and 5. Kansfield, a gay minister at Greenpoint Church in Brooklyn and the chaplain for the FDNY, now thinks her decision was a mistake.

Her children ended up hearing about the shooting from other children at school. And piecing together bits of information, they came to a frightening, inaccurate conclusion: Donald Trump would kill all gay people.

Kansfield told the Daily Dot that the situation was a reminder that if she didn’t talk to her children about what is going on in the world, someone else would. “I would rather be with them when they learn about something, so I can talk about it with them and answer questions as truthfully as possible, than have them pick up stuff at school.”

My sister in Orlando took my four-year-old nephew to a vigil tonight. And people complain about having to talk to kids about homosexuality.

The prevalence of information on the internet and social media has made it harder and harder to keep children sheltered from the realities of pain and violence, says Vikki Reich, parenting columnist for the Star Tribune and mother of an 11- and a 15-year-old.

“As parents, we are in this strange position where we want to protect our kids, but we also have the responsibility to educate them,” Reich told the Daily Dot. She described a conversation with her son, where she told him she wanted to shield him from the scary things in the world.

“But the best way to protect us,” her son told her, “is to explain things to us.”

This is now Reich’s guiding principle when parenting through difficult realities. The moment she heard about the Orlando shooting she was at a cabin on a lake, but she sat down with her oldest child and told him what was going on. She told her younger child not long after that. “You can’t underestimate the power in just bringing it up.”

People are here with their children and parents and by themselves chanting "Orlando We Got Your Back" pic.twitter.com/Wsv2MflS4y

Reich notes that while starting the conversation can feel tricky, she advises parents not to wait and to instead initiate the dialogue right away. “I just assume my kids are going to have access to information sooner rather than later,” explained Reich. “I just try to beat them to the punch, so that when they receive the information, they are receiving it from someone who is safe, from someone who can sit with the complexity, and from someone who is invested in their emotional well being.”

She adds, “We can’t trust social media to give our kids perspective on tragedy—we have to be the people that do that.”

Dr. Deborah Gilboa, pediatrician and a parenting and youth development expert, has outlined a three-step process for parents approaching a conversation about Orlando with their children. She advises that adults process their own emotions first. Second, they should decide what they want their child’s main takeaway from the talk to be. Finally, the talk should be factual and developmentally appropriate. After that, she says, parents should let children lead the discussion—allowing them to ask the questions they need to ask, and then parents can reassure them.

Gilboa also referred to the American Society of Pediatrics website, which has information for parents to help them talk through tragedies with young children. The site advises, “The underlying message for a parent to convey is, ‘It’s OK if these things bother you. We are here to support each other.'”

“But the best way to protect us,”
her son told her, “is to explain things to us.”

She also notes that if a child is under the age of 7 and isn’t directly affected by the tragedy, parents don’t necessarily need to talk to them about it. Yet she admits that it is more difficult to limit a child’s exposure to tragedy in an age when media is so pervasive.

Reich, however, doesn’t believe there is an age requirement to this kind of conversation. “I was talking to my kids about things in the news when they were 3 or 4,” she explained. “The language was different—less about killing, more about hurting. You just change the language and the frame of reference to a thing a little kid can understand.”

“It’s our job to protect our children,” she continued, “but it’s not our job to shelter them from the truth. We are available always if they are scared or need to talk about something. You need to be their safe space for those conversations.” She encourages parents to hang in there as the conversations get harder and children develop their own opinions.

Parents also have the tendency to spare their children from feeling difficult feelings. But Kansfield says that grief comes to us all in many ways, and that more important than hiding our children from grief is to teach them how to work through it.

“I wouldn’t want my children to not experience various emotions, whether it be sadness or anger or fear,” explained Kansfield. “To recognize the full spectrum of emotions can be part of the process.” Parents inevitably can’t protect children from loss or powerlessness, she said, so “what I want them most to learn is to have some techniques and ways of thinking that do provide resiliency in the midst of trauma.”

Listening to Kansfield’s advice, I thought of my own children, now 3 and 5, and realized that I hadn’t talked to them about the Orlando shooting because of my own lack of answers, my own fear and doubt. When I asked Kansfield about this, she encouraged me to sit with the complexity—because, after a while, canned answers don’t work for kids.

She also encouraged me to talk about the things we do know. She quoted Fred Rodgers from his syndicated newspaper column, which encourages people to “look for the helpers” in times of tragedy.

"Look for the helpers." Was introduced to this concept today, and it's only thing helping me get though https://t.co/V0sKf8qMBs via @youtube

“One of the things I told my kids,” Kansfield said, “was bad things and evil things do happen in life, and know that when they do, know that all of the possible help that could possibly be there will show up. There was one shooter, but there were hundreds of first responders…And if you ever are in danger, everyone who could possibly be there, will be there.”

My daughter said nothing. She just skipped away to finish watching her TV show. The conversation hadn’t made an impact until a few minutes later, when she disappeared into the kitchen and brought out a plate of food—Go-gurt, an apple, a cheese stick—and put it in front of me.