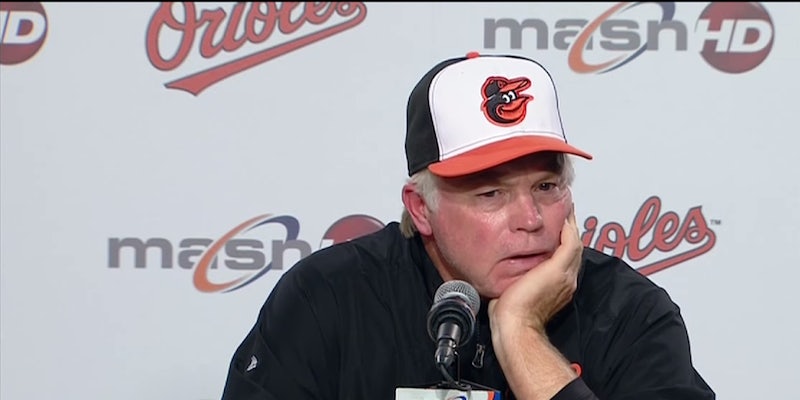 How have the most reasoned and correct statements come from a baseball team?

A lot of people with a wide reach have used their platforms to say some pretty stupid things about the Baltimore unrest. Several pundits blamed the black community for the long-standing issues that culminated in this week’s protests, while others distanced themselves from the anger that manifested itself in the demonstrations. Elected officials even called protesters “thugs”—a racially coded word with disturbing undertones.

But in the thick of all the white noise, the most reasoned and correct statements have come from the Baltimore Orioles.

Orioles manager Buck Showalter addressed the unrest in Baltimore following a win over the Chicago White Sox in the empty Camden Yards. He was asked to give advice to young black males.

“I’ve never been black, OK? So I don’t know, I can’t put myself there. I’ve never faced the challenges that they face, so I understand the emotion, but I can’t… It’s a pet peeve of mine when somebody says, ‘Well, I know what they’re feeling. Why don’t they do this? Why doesn’t somebody do that?’ You have never been black, OK, so just slow down a little bit.”

Wait a minute. You’re a white dude with money who isn’t willing to assume the experience of others should be the same as your own? Keep going… “I try not to get involved in something that I don’t know about…” but you do know that silence is complicity in this situation, right Mr. Showalter? Oh, he wasn’t finished.

“…but I do know that it’s something that’s very passionate, something that I am, with my upbringing, that it bothers me, and it bothers everybody else. We’ve made quite a statement as a city, some good and some bad. Now, let’s get on with taking the statements we’ve made and create a positive. We talk to players, and I want to be a rallying force for our city. It doesn’t mean necessarily playing good baseball. It just means [doing] everything we can do. There are some things I don’t want to be normal [in Baltimore]. You know what I mean? I don’t. I want us to learn from some stuff that’s gone on on both sides of it. I could talk about it for hours, but that’s how I feel about it.”

Sure, this may not be as hard-hitting as Orioles COO John Angelo’s thought-provoking response. But it looks like the Orioles organization totally understands what’s going on, and it’s sending the right message to the people of Baltimore.