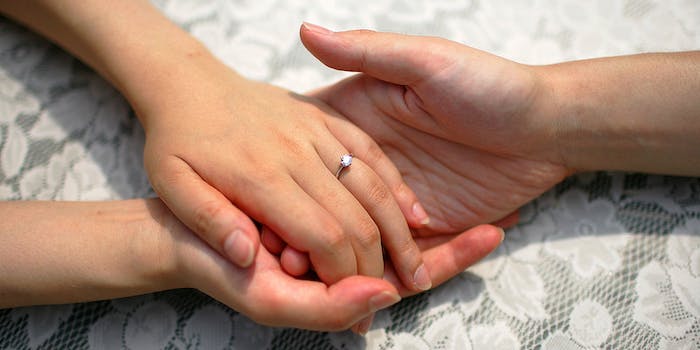 13 questions I’m sick of hearing about my open marriage

I've been with the same man for more than a dozen years. We're deeply in love. We also have sex with other people. Any questions?

When people ask me about my open marriage, often the conversation ends with the phrase: “More power to you, but I could never do it.” I feel the same way about people who put on a suit and go into an office every day. Lots of people find nine-to-five jobs fulfilling, and that’s awesome. But they’re probably not for me.

Robin Rinaldi’s ebook The Wild Oats Project: One Woman’s Midlife Quest for Passion at Any Cost, which documents her year-long experiment with an open marriage, was released last month. And though her experience isn’t exactly like mine—whose could be in the infinite weirdness of human experience?—I can’t help but be super psyched that the tale of her open marriage is getting the warm response it is, with the Library Journal praising Rinaldi’s project as “daring” and a “true page-turner.”

By telling her story, Rinaldi is raising awareness of this fairly common yet utterly taboo relationship status. Although her marriage ultimately ended in divorce, her bravery has given me the courage to add the narrative my husband and I have written to the library of love stories. So, once and for all, here are the answers to the questions I am just sick to death of answering about my open relationship. (My husband Miles has also chimed in with his own responses.)

1) How long have you guys been open?

Maybe it has to do with the fact that the first time we hooked up, we were in other relationships (sorry, Topher and Mari—you guys were pretty cool, all in all, and you definitely didn’t deserve that).

We met my sophomore year and his freshman year of college, and that entire year we denied we were even boyfriend and girlfriend. “We’re not dating, we’re just having a ton of sex and are together all the time,” we’d tell people. But that summer, we traveled to see each other every weekend. That gave us the harsh reality check: We weren’t just hanging out and having sex, we were in love.

The following fall, I studied abroad. We didn’t want to break up, but we didn’t want to miss out on what could happen while we were apart, and cheating and lying is something neither of us wanted to put the other through. We love each other, after all. And who would want to hurt the person they love?

While apart, I hooked up with the guy who played Badger on Breaking Bad. I can’t imagine not sharing that hilarious fact with my best friend.

The next year, he went abroad, and the year after, I graduated. Even with all this time apart, I never once worried that we would stop being together. Wanting to have a biological interaction with someone else never seemed like a good enough reason to stop being with the other half of my soul.

Or, as my husband Miles puts it: “Remember when you were afraid I would dump you because I didn’t like that haircut you got? That would have been more plausible than us breaking up to sleep with other people.”

2) Whose idea was this “arrangement”?

There aren’t really rules, but we use common sense. No one gets sexiled from the apartment. We change the sheets if we dirty them. We often, but not always, try to schedule dates on the same night, which works pretty well as long as one of us is home in time to walk the dogs. Miles says he’s noticed that the dogs always suck up to our boyfriends/girlfriends. He thinks they may be bigger sluts than we are.

4) Do you guys tell each other everything?

Pretty much. For instance, I told him about the first time I tried butt sex, and he still teases me about it, if that’s what you mean.

“That was hilarious,” says Miles.

5) Do you ever meet each other’s boyfriends/girlfriends/friends with benefits?

Yeah, but some of them are cooler about it than others. For instance, I dated this one guy for a while who was insanely jealous of my husband. He always talked about what could have been if he’d met me first. Once, I invited him out to a party we were both going to, and he wouldn’t leave my side for a second, and the next day bitched heavily to me that my spouse hadn’t been nice enough to him. It was really uncomfortable and definitely contributed to my ending it.

Miles says he really liked hanging out with this one dude I’ve been seeing lately, “but then again I can happily watch old episodes of The Simpsons with just about any human being.”

Sometimes, I guess. But jealousy isn’t unique to our relationship. I’d be willing to wager that there’s less jealousy in a relationship where there is no chance of anyone being cheated on than one where there’s a constant danger of that happening.

And sex is never the basis of the jealousy. I actually kinda like knowing that my husband is out there treating another woman well. Few straight women get to go out with hard-fuckin’ feminists like my husband. and I’m all about spreading the joy. I feel like if girls see that guys like my husband exist, they might not settle for someone shitty.

Why wouldn’t it be? We’ve been together for thirteen years. Why would something that’s been working for well over a decade just stop working all of a sudden? Plus, isn’t there, like, a huge chance that a monogamous marriage will also end in divorce? Yes, there totally is (nearly 40 to 50 percent, according to current American Psychological Association statistics).

8) Why would you guys choose to have sex with other people? Is the sex in the marriage not good?

On the contrary, sex with my husband gets better every day. (If you don’t believe me, we actually have statistical evidence of our mutual satisfaction.) After more than a decade together, not only do we know each other’s bodies as well as our own, but we also keep learning new tricks and moves.

After all, the first time we had sex, we’d each only ever had sex with one other person. Now we have more than 24 years of cumulative sexual experience to share with each other. Maybe things would have been different if we’d met our soul mates at 50 instead of as teenagers. But you only get one life, and this is how ours is playing out.

9) There must be something you’re looking for outside the marriage. What is it?

I like talking to people whose lives are different than mine. I like hearing their stories and trying to figure out what makes them tick. The adrenaline rush of going out to a bar and looking for a stranger to bring home is lost on me. I just like going out and meeting new people.

Miles feels the same way. “I’d rather make out with a friend I’ve known a good long while when we’re both a bit drunk and in a good mood,” he says.

In short, I’m not looking for anything. I just am.

10) If you’re in an open relationship, why would you get married in the first place?

The answer to this question is simple. I woke up one day and realized I’d been madly in love with the same person for eight years. I remember the moment clearly: I was sitting on the toilet, peeing with the door open in the studio apartment we shared with two dogs for two years, and I thought “I never, ever want to be apart from this person.” So I asked him to marry me while he was brushing his teeth, and through the lather of his toothpaste he said, “Yeh.”

Our wedding was a pool party. There were only 12 guests. I have never had more fun in my life. And really, isn’t that the only reason people get married in the first place? To throw a big party and celebrate their lives together in front of all their friends and loved ones? I think Miles said it best with this tweet:

11) Would you ever become monogamous?

Maybe. I never thought I’d try cocaine and I did. Though I can’t really imagine what else could possibly change in our lives that would make us want to. Miles says he’d become monogamous if and only if he were running for president—“but actually, not even then.”

12) How do I get my significant other to do this with me?

I have no idea! I’m not in your relationship. But all kidding aside, an open relationship isn’t something you can just coerce someone into.

“I’ve heard of one-sided non-monogamy working, but usually when the other party wasn’t invested in sex at all,” says Miles. If that’s not the case in your relationship, then an open marriage might not be for you.

Miles doesn’t wear a ring, because he says he’s “just not a jewelry guy.” But I do, and I hate it when people ask me this question.

The long answer is that when we told our parents we were getting married, my dad gave me his mother’s ring. It’s really cool and art deco. I’m named after her, and she smuggled it across the ocean during the Holocaust.

We didn’t exchange rings during our ceremony, and I never thought I’d wear one while I was married, but I still wear the ring to this day, because it’s an object I love that is pretty and it makes me feel close to my family. My ring isn’t about sexual fidelity, it’s about love and family.

The short answer: “Because it’s my goddamned right to wear a motherfucking ring, you nosy asshole.”