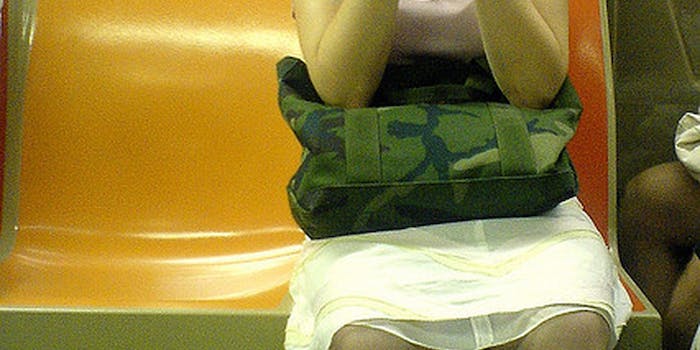 When a group of teens started threatening a 12-year-old girl on Twitter, Anonymous members and other hacktivists decided to step in.

Hunter, Josh, Edward, and Chris are in many ways typical Texas teenagers. They do what other teens do: attend high school, support their local sports teams, hang out, go on Facebook, chat with their pals.

And they do what most other teens don’t do: they threaten to gang rape a 12-year-old girl.

#OpAntiBully was there. Silly boys. You should have expected them.

As reported by the Daily Dot a week ago, Anonymous and other hacktivists have issued an ultimatum to bullies and trolls on social media: Using the digital equivalent of a threatening Christopher Walken voice, they’ve said “This shit has to stop,” and they are just the ones to make it happen.

The mission was inspired in part by the memory of Amanda Todd, the teenage girl who committed suicide Oct. 10 after enduring online blackmail and bullying. The related Twitter hashtags are #OpRIP (for Todd) and #OpAntiBully.

Susan (a pseudonym) is an enthusiastic 12-year-old, new to social media and learning her way around Twitter. She retweets a wide variety of tweets, including some that could be considered mildly provocative (“I can’t remember not having boobs”) but not unusual for a girl going through adolescence in 2012. She also uses a variety of apps to increase her follower numbers, because more is better, right? Isn’t that what the social media gurus are always saying? In her outreach, however, she somehow came to the attention of a group of older boys (only one is still a juvenile).

When she became disgusted by the crude tweets of one member of the gang and unfollowed him on October 25th, they decided that what she needed most was a nightmare.

They then gave it to her, relentlessly, right up until the moment she deleted her Twitter account.

“WHY DID YOU TELL ME TO DRINK BLEACH? then you delted it so you dont get into shiz,” she tweeted, and retweeted anti-bullying statements before finally deleting her account. All told, she handled it extraordinarily well, especially for someone so young. There is, however, a limit.

What the perpetrators didn’t know was the payback Anonymous had in store for them as a result.

Their threats had not gone unnoticed by hacktivists hypersensitized to the issue of teen bullying, but unlike previous cases where the collective reported the offending accounts to Twitter support immediately, this time they did some homework before going to the authorities, and when they did, they went BIG.

OpAntiBully members watched and took screenshots of the evidence: tweets confirming the boys knew the girl’s age, threats of gang rape, boasting of driving her off Twitter. Then Anonymous went further, hunting the perpetrators down to their high schools, Facebook pages, and even homes. They posted the information to Pastebin, and updated it a couple of days later.

While the dox released has redacted the boys’ home addresses and phone numbers, it contains their real names: Josh Perez (17), Edward Darek Gomez, Chris Garcia, and Hunter Ives (all 18).

A member of OpAntiBully told the Daily Dot the bullies’ addresses are being withheld as a cyberweapon to ensure that they cooperate and don’t engage in this kind of behavior in the future. The dox also includes contact information for the principals of each of their high schools.

“Out of all the information I’ve gone through recently, I’ve not felt quite as strongly as I have for this new girl [since Kylie]. It actually almost pushed me to breaking point the other day. I can’t stress how much Susan doesn’t want the attention. She’s just trying to forget about it. Hunter, the weasel who started all of this, the worst abuser, has brushed all the blame onto the 2 least involved people. Heard from someone at the school that he rolled on Edward and Chris. Still won’t accept blame.”

And in the dox itself, he said,

“I am sick of seeing people who think they can get away with breaking someone’s confidence and planting seeds of self-hate into someone’s head. What gives you the fucking right to attack someone to such a breaking point? If you are vile enough to do so and stupid enough to do so on a public forum, such as a social website, then you should know this…..We will find you and we will highlight your despicable behaviour for all to see.

-The Many people fighting for a better Society

Since the original Pastebin release on November 19th, some of the boys have been sanitizing their timelines by deleting tweets and apologizing. “Yeah.What I said was wrong. But to call your own friend”pathetic”is pretty low itself. At least I know who my real friends are after all this. I’m just glad I could realize what I did was wrong,” tweeted Eric Gomez on Tuesday. Josh has protected his new account and apparently deleted his previous one. Hunter has gone through several accounts, and his latest is protected. Chris is complaining there’s been too much negativity, retweeting “brb, harassing a 12 yo girl” and commenting, “lol. dammit man. that just made my night.”

OpAntiBully’s work may have just made Susan’s.