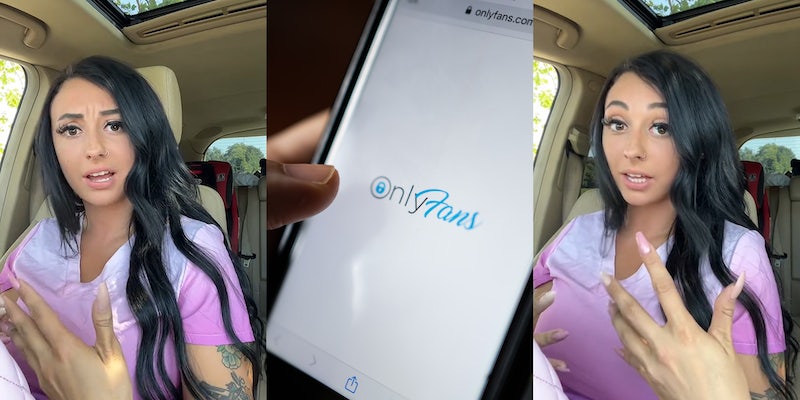 ‘But I’m the problem and I get let go?’: OnlyFans creator claims she was fired from nursing job due to co-workers watching her content on the clock

An OnlyFans content creator says she was let go from her nursing position because other nurses were watching her adult videos on the clock.

On Thursday, Jaelyn (@playgirljaelynnn) posted a TikTok that now has more than 1.6 million views, stating upfront that her main source of income is OnlyFans. However, she says she also works at four nursing homes in the tri-state area and has for a year-and-a-half.

But the day prior, Jaelyn says she was called into the office of a woman she’s never met, who told her she knew about the OnlyFans. The woman allegedly claimed that the nurses at this particular nursing home have been looking at her socials and OnlyFans while Jaelyn is with patients. Jaelyn says the woman told her it has become an issue, which resulted in her firing.

“But I’m the problem and I get let go?” she questions in the video.

@playgirljaelynnn Like Is that even legal 😂 #fyp #healthcare ♬ original sound – Jaelyn ✨

Jaelyn adds that her co-workers would have to be paying for her OnlyFans in order to be watching her videos on the clock.

Commenters urged her to file a wrongful termination complaint or write an email so there’s a paper trail.

This isn’t the first time someone found out their co-worker was watching their OnlyFans videos, as one creator claimed their manager subscribed to their account. Similarly, another Only Fans creator says she was forced out of her nursing job due to her adult content in August.

Jaelyn posted an update on the situation Friday, stating she met up once again with the woman who fired her to get a written explanation and sent it to a lawyer. Essentially, Jaelyn believes she was fired for being a distraction. She states in another TikTok that she regularly works nursing jobs because OnlyFans income can be unpredictable.

Jaelyn also shouts out all the support she’s received from viewers, especially from women.

“I did not except to get support from this,” she says. “I’m not used to that. I’m used to walking in a room and people staring at me, and I know exactly what they’re thinking and what they’re talking about.”

The Daily Dot reached out to Jaelyn via Instagram DM.