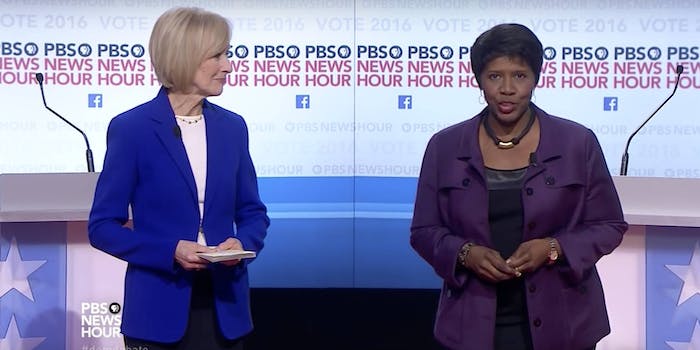 Petition asks for a woman to moderate a presidential debate

It's been 24 years since that's happened.

The 2016 election is one of immense historic significance. Hillary Clinton has become the first female presidential nominee, while Donald Trump’s Republican nomination signifies a massive shift for the Grand Old Party.

And yet, even though a woman will stand at the Democratic podium at the first presidential debate on Monday, the moderator’s table will be without a single female journalist.

That’s why advocacy group UltraViolet has started petition calling for a female moderator.

“The Presidential Debate Commission just announced that men will moderate all three debates between the first female major party candidate and the most sexist candidate in recent history. The one woman included was only trusted to co-host,” the petition reads in part.

Veteran debate moderator and ABC’s This Week co-host Martha Raddatz will be playing second fiddle to Anderson Cooper during the second presidential debate on Oct. 9. Four days prior, CBS News anchor and correspondent Elaine Quijano will moderate the lone vice presidential debate, however.

This is a far cry from the historic debate moderation team of Judy Woodruff and Gwen Ifill during the sixth Democratic debate, the latter of whom UltraViolet suggested as a potential moderator for one of this year’s presidential debates. UltraViolet also suggests Rachel Maddow, Christiane Amanpour, and Tamron Hall.

The last female presidential debate moderator—former ABC News journalist Carole Simpson in 1992—was one of the first people to speak out about this problem during the 2012 election. “This year more than any other presidential year needs a female moderator,” Simpson told the Huffington Post during the Romney-Obama matchup four years ago.

Given Trump’s rampant misogyny, which has been highlighted as far back as the first Republican debate, as well as the bevy of equality issues facing the country, those words ring just as true today. It was three high schoolers who launched a similar petition in 2012 to advocate for a female moderator. UltraViolet is hoping to pick up where they left off and reach this important goal.