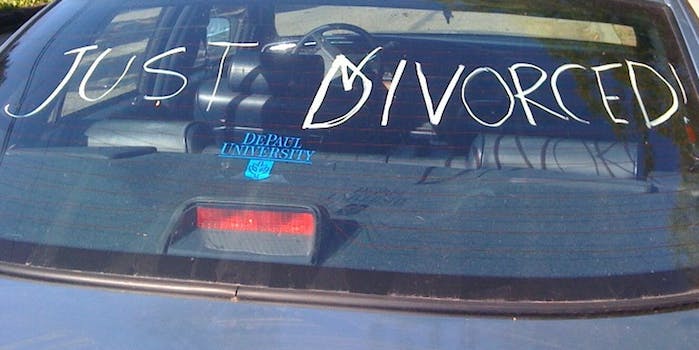 This new startup will get you divorced for $99

Who needs lawyers to do the divorce paperwork when you've got the Internet?

There are plenty of ways to meet your spouse online. Now, there are more ways to divorce over the Internet, too.

Yesterday Sandro Tuzzo and Larry Maloney unveiled Separate.us at TechCrunch Disrupt SF. The site promises to be an inexpensive, streamlined way for couples to complete the paperwork needed to get a divorce.

“There are tons of dating apps that connect people, but what if you need to disconnect?” Tuzzo told the audience, according to TechCrunch. “There’s nothing.” He speculated that with nationwide marriage equality allowing more couples than ever before to get married, the divorce rate will be on the rise as well.

New users will be prompted with a Q&A to gauge whether they will be eligible to use Separate.us. Once a couple is deemed eligible, the site will translate all of the complicated, necessary forms into layman’s terms, so that people without law backgrounds will be able to complete them independently. Ideally, couples splitting up will be able to avoid costly legal fees as much as possible.

Now that is a pretty disruptive start up idea: divorce made easy > Separate.US :-/ #TCDisrupt pic.twitter.com/gXx3LoPgsR

Though it’s too early to tell how sharply Separate.us will differ from existing sites like CompleteCase and Wevorce, one immediately apparent distinction is the price tag. On Separate.us, the base price for initial filings is only $99, a far cry from the typical expenses involved in a divorce, even when compared to its online competitors. (Filing through CompleteCase costs $299, while the average divorce completed through Wevorce costs $10,000.)

Currently, Separate.us is only available in California, and it is still in the private beta stage. You can join their email list to stay up-to-date on the launch.