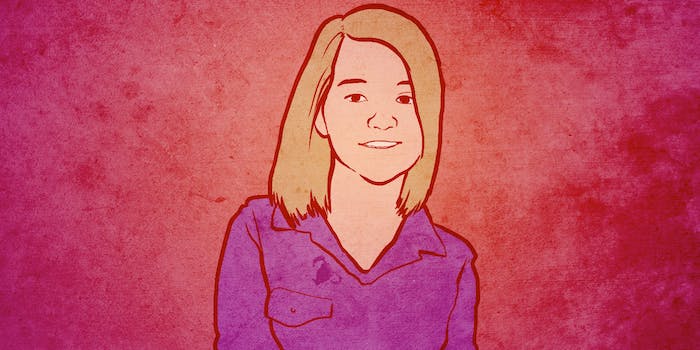 The incident highlights sexism in the male-dominated field.

In April, Shania Clifford became the first female student to win top honors in the Ohio Skills USA masonry competition. By earning gold, Clifford—17 and from Scioto County Technical Center—earned the chance to compete at the national competition, which is being held this week in Louisville, Kentucky.

Except, Clifford isn’t going. She found out via Facebook that the person who received third place, a boy, would be attending instead.

Clifford told the Columbus Dispatch that she learned this in May, when she saw a Facebook post from a fellow competitor saying he would be the one representing the state in the national tournament.

Clifford and the Ohio Board of Education, which sponsored the competition, did not immediately return requests for comment. But the Columbus Dispatch reports that the change was made due to a miscalculation.

Brittany Halpin, a spokeswoman for the Ohio Department of Education, which sponsors the competition, said in an email, “An error was made during the entry of scores into the final score spreadsheet.”

“This error affected results for several students,” Halpin said in the email, “and resulted in the rankings showing an incorrect winner of the competition.” Halpin added that no errors were made on the judges’ scoring sheets.

In response to the decision, Clifford has received an outpouring of support on her Facebook page and Twitter.

Comments also highlighted the sexism in the male-dominated field of masonry. One Facebook commenter told Clifford, “In any job, the women have to be far superior to even be considered equal.” And other female bricklayers shared their stories of discrimination and commended Clifford for speaking out. 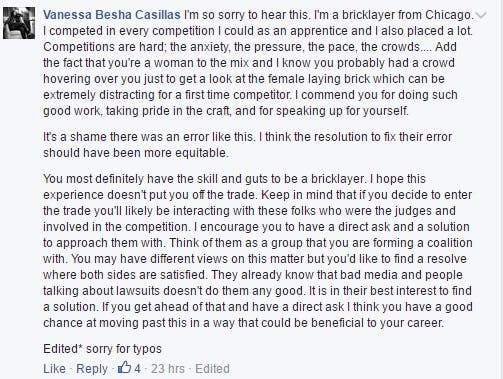 “She had the best plumb there,” Moore said. “Two or three corners were perfect.”