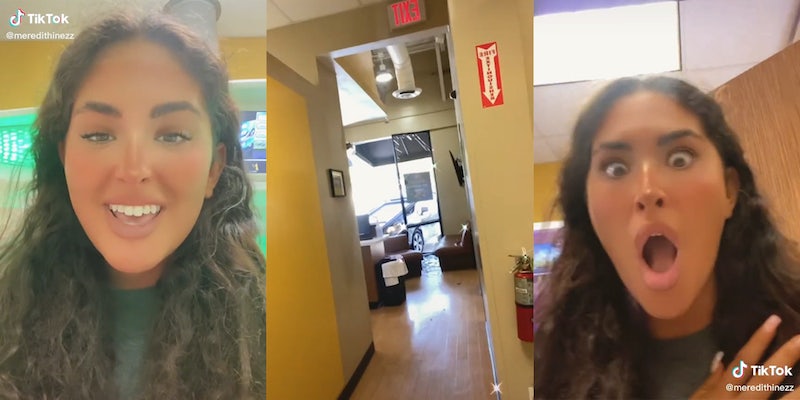 ‘It was just some old lady’: Worker shares viral video of car crashing into her office on her last day of work

'Of course this would happen on my last day.'

A woman on TikTok was recording a vlog for her friends during her last day at work when a car crashed into her office.

TikToker Meredith (@meredithinezz) shared a portion of the vlog on TikTok, where it got 7.4 million views as of Thursday. In the TikTok, she appears to be about to say something when a loud crash interrupts her. She turns around, shocked, and shows the car that had crashed through the lobby of her office.

Viewers loved the randomness of the crash and several cracked jokes about the comical TikTok video.

“The sparkle effect has me ROLLING,” one viewer commented, referencing the sparkle filter Meredith had used during the video.

“The timing, with the sparkles universe got jokes,” another viewer commented.

Multiple viewers commented asking if anyone had been injured by the crash. Some wanted to know what Meredith was about to say when the car interrupted her.

In a follow-up video, the TikToker explains that she had been in the middle of recording a vlog about her new job to send to her friends. She says the person driving the car was “just some old lady,” and no one was injured by the crash.

In the video, Meredith says no one knows what caused the woman to crash into the office but speculates that she may have put her car in reverse by accident.