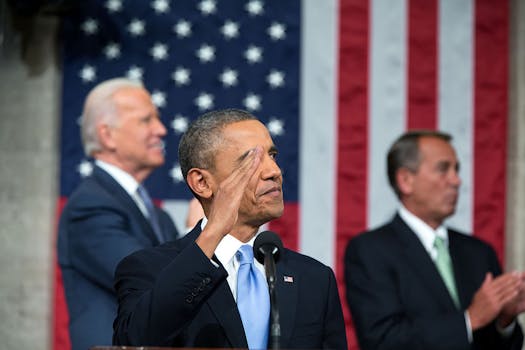 Not everyone was happy with ‘s State of the Union address on Tuesday night—and we’re not talking about conservatives.

In 2012, Obama promised Americans that he would “listen to your voices.” Tuesday, at a rate over 1 million tweets per hour, dissenters made their voices heard in an effort to counter the President’s sentiments.

Foreseeing that the president would upset Black America by leaving out a serious discussion of the issues that have led to a burgeoning movement against police brutality in the U.S., many followed the speech by commenting on the “State of the Black Union” through the hashtag #SOBU, which reached about 12,000 tweets during the speech.

In a key moment, Obama tread on a safe middle ground in addressing the deaths of Michael Brown in Ferguson, Mo., and Eric Garner in New York City, making light mention of both the dangers faced by black men in America and by police officers:

Following #SOBU offered an alternative view from the perspective of America’s most disenfranchised citizens:

The State of The Union in blackness is deadly these days. And we can't act like that's not true. #SOTU

You stand united with people who have suffered terrorism? Really? like Black folk being terrorized by cops? #SOBU

Black women getting equal pay and maternity leave is nice and great. They still getting killed by cops tho #SOTU #SOBU

@BarackObama Vows to Reform the Justice System Because Your Life Matters #SOTU #SOBU #BlackLivesMatter…PROVE IT With Executive Action Bro!

If all lives mattered, why are backs turned to the tragedy of 2000 individuals in Nigeria, while spot lights are on Je suis Charlie?

One of the most anticipated moments came when Obama upset those hoping he would make mention, a nod, or at least some kind of recognition of the Black Lives Matter movement. Instead of taking a direct route, however, the President pulled an “all lives matter”—a sentiment that may sound reasonable to those who escape daily discrimination, but which many see as an an easy sidestep that fails to acknowledge the specific suffering faced by black people and other minority populations in America at the hands of the police.

We are just waiting to hear when Black Lives and the lives of the poor will matter in the #SOTU. #SOBU

"Yay! You kinda mentioned Ferguson!"
"But wait, why you have to pull an 'all lives matter?'"

That was all fire. But we can’t ignore Obama’s #AllLivesMatter rhetoric when, well, my community is being slaughtered. #SOTU2015 #SOBU

We are STILL a country in distress! The future is bleak for Black children! #SOTU #SOBU

We certainly appreciate the subtle nod to #BlackLivesMatter in the #SOTU …but a nod isn't enough. #SOBU

The criminal injustice system serves those who it was created to protect. All lives matter POTUS? Step up black man. #BlackLivesMatter #SOBU

If the frustration seems like an overreaction, take into consideration this eloquent AJ+ explainer on the frustrations many people shared about the sentiment that “all lives matter” when it’s wedged in the context of police brutality and race relations:

A poll by Al Jazeera America and Monmouth University shows that fewer than 15 percent of America feel that race relations have improved during Obama’s presidency. So it may be little surprise that many were left feeling disappointed with his remarks.