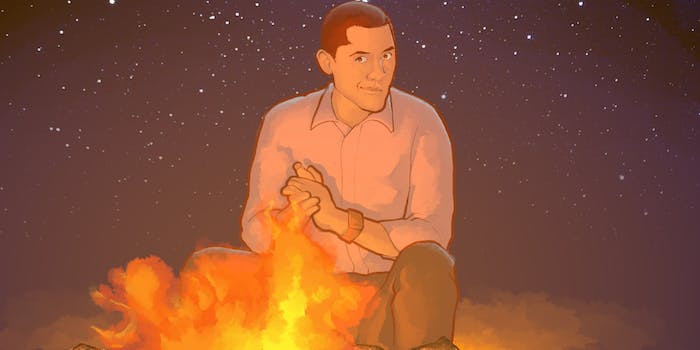 Girl Scouts spent the night at the White House—one of the most haunted places in the U.S.

While there’s no word on whether there were s’mores present, Girl Scout troops from Maryland, Virginia, West Virginia, Washington, and Oklahoma camped out at our nation’s capital Tuesday night for the first time in history.

Those Girl Scouts camping out on South Lawn were moved indoors overnight as storms moved through DC. Per @Astro_Cady pic.twitter.com/CiyeFtAWiN

Little did they know, they were visiting one of the most haunted places in America. Cue the flashlight.

The First Couple invited a group of Girl Scouts to camp out in their backyard in an endorsement of Michelle Obama’s Let’s Move! Outside campaign. The initiative is a subset of the Let’s Move program, encouraging young people to exercise more in the great outdoors.

“What are you guys doing in my yard?” President Obama said to the girls, according to USA Today. “When did you guys show up?”

The Obamas joined the Girl Scouts for stories and songs around the campfire. The president reportedly told the girls they sounded “pretty good,” pointing out that Michelle was “rocking out” to the music.

As heavy rain and lightning storms rolled into Washington, D.C., the girls were forced to take shelter on this dark and stormy night in a conference room in the office building located next to the White House. While no word yet on what ghost stories were told, Obama had lots of material to work with.

According to the White House Ghost Stories compiled by the White House Historical Association in October, there have been regular sightings of more than 10 ghostly apparitions since the late 1860s.

Mary Todd Lincoln, for one, was known to participate in “spirit circles or séances” in the Red Room of the White House, in an attempt to contact her son, Willie, who died. According to the White House Historical Association’s report, “spiritualism was wildly popular during the height of the Civil War as families sought comfort for the loss of loved ones.”

Dozens of White House inhabitants and visitors have also claimed to have seen her husband, Abraham Lincoln, in the Lincoln Bedroom (formerly a meeting room during his presidency, where he signed the Emancipation Proclamation) and Yellow Oval Room.

As reported by Ancestry.com, Winston Churchill took a long bath, after which, he exited to the adjoining bedroom (naked, carrying a cigar), where he encountered President Lincoln leaning against the fireplace. “Good evening, Mr. President,” Churchill said to him. “You seem to have me at a disadvantage.” Lincoln reportedly smiled before disappearing into thin air.

Girl Scout troops take note: these are what scary stories are made of.