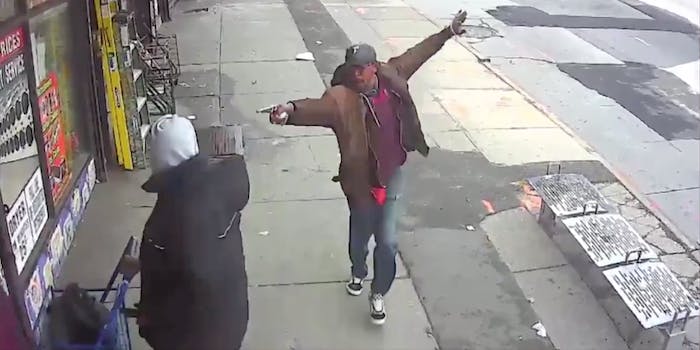 Officers shot and killed Vassell on Wednesday in Brooklyn.

The New York Police Department has released video footage that shows 34-year-old Saheed Vassell, a Jamaica-born Black man who lived with mental illness, pointing a metal pipe at pedestrians as if it were a gun on Wednesday before officers shot and killed him.

Police also released transcripts of the 911 calls that neighborhood residents in Brooklyn made about a man holding what they presumed to be a gun.

“There’s a guy walking around the street, he looks like he’s crazy but he’s pointing something at people that looks like a gun and he’s like popping it as if like if he’s pulling the trigger,” one caller said.

New video and 911 call transcript excerpts from yesterday’s police involved shooting in #Brooklyn. NYPD received several calls from neighborhood residents about a man pointing a gun at people on the street.

Vassell was reportedly waving a metal object at pedestrians when cops responded to three 911 calls of a man waving a silver gun at people. When they arrived on the scene, Vassell took a “two-handed shooting stance” and pointed the pipe attached to a knob at them.

Four officers fired 10 shots at Vassell shortly before 5pm on Wednesday. He was taken to Kings County Medical Center, where he was pronounced dead. NYPD did not specify whether officers warned Vassell before firing, and none of the officers involved wore body cameras.

Vassell had a 15-year-old son, Tyshawn. His 63-year-old father, Eric, said Vassell lived with bipolar disorder but refused treatment and hadn’t taken his medication in years. Community residents said they regularly saw Vassell on the corner, and one community member, John Fuller, told the New York Times that local police officers should have known him well enough not to fatally shoot him.

New York City Mayor Bill de Blasio defended the officers’ actions on Thursday, hypothesizing what could have happened if Vassell had actually been carrying a gun.

“If this individual with a loaded weapon, who for whatever reason, including a mental health challenge, was ready to use it, that’s a split-second matter of trying to save lives right then and there,” de Blasio said. “How you get the full facts of what the person has in their hand, and what their mental health condition might be, and are they known to anyone, in something that’s playing out in seconds and minutes, that’s a very tall order.”