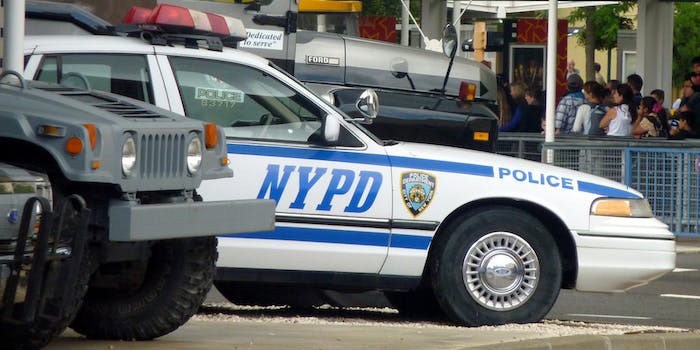 NYPD officer charged for allegedly stomping on a man’s head

An NYPD officer faces a year in jail for stomping on a suspect’s head while two other officers held the man to the ground.

Officer Joel Edouard, 37, faces one count of assault, one count of attempted assault, and one count of official misconduct, for what appears to be overly aggressive treatment of Jahmiel Cuffee on July 23 of last year.

The incident happened less than a week after another NYPD officer killed Staten Island man Eric Garner. A grand jury decision to not indict Officer Daniel Pantaleo, who is white, for using a banned chokehold that killed Garner, who was black, sparked a wave of protests across the U.S.

Like the choking of Eric Garner, Edouard’s alleged stomping of Cuffee was caught on video. Unlike the Eric Garner incident, both Edouard and Cuffee are black.

Brooklyn district attorney Kenneth Thompson said in a statement that Edouard “allegedly stomped on the head of a suspect as he lay on the ground, which is unacceptable for a police officer.”

Thompson goes on to describe Edouard’s alleged actions as “a serious matter,” but added that “this indictment should not reflect on the great work being done throughout the city by the vast majority of police officers who perform their duties honorably.”

The indictment of Edouard comes amid falling tensions between the NYPD and New York City Mayor Bill de Blasio, whose statements following the non-indictment of Pantaleo sparked a wave of defiance by the city’s police force.