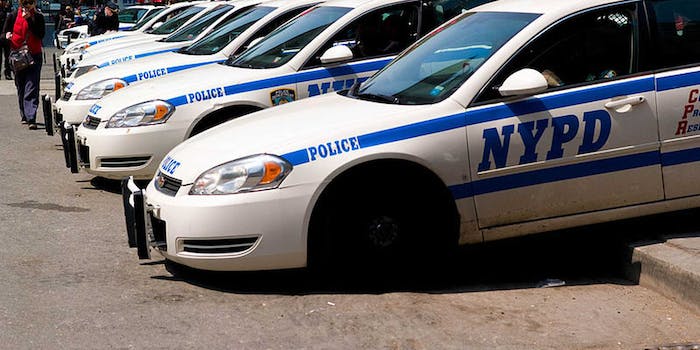 The officers are in stable condition.

Two NYPD officers were shot on Monday night, leading to a new manhunt for the suspects, just a few weeks after the murder of a pair of New York City cops specifically targeted because of their badges.

The shooting occurred at around 10:30pm Monday evening when plainclothes officers Andrew Dossi and Aliro Pellerano, along with three others, were responding to a report of a robbery at a deli in the Bronx. The officers reportedly pursued the two suspects into a nearby Chinese restaurant. Once inside, the suspects began shooting at police, who returned fire from the exterior.

Pellerano was shot in the arm and grazed in the chest; Dossi was hit in both the stomach and the arm. Neither of the officers’ injuries are thought to be life-threatening. One of the suspects was reportedly shot in the back.

New York Police Commissioner Bill Bratton told WNBC the suspects fled the restaurant and carjacked two women in a white Camaro. They soon abandoned the car and ran on foot. A manhunt is still on for at least one suspect.

NYPD confirms no suspect is in custody for the shooting of 2 officers in the Bronx. https://t.co/g5wNp84Nrb pic.twitter.com/QEg4fvlnB0

“This is absolutely a case of officers going above and beyond the call to protect their fellow New Yorkers,” de Blasio told the assembled reporters. “This is another indicator of the dangers that all officers face in the line of duty. We depend on them to keep this whole city safe.”

De Blasio has been at odds with the city’s beleaguered police department since the December shooting of officers Rafael Ramos and Wenjian Liu by Ismaaiyl Brinsley, who wrote on social media that he specifically intended to kill cops in retaliation for a string of recent, high-profile police brutality incidents. Those incidents have included the shooting death of African-American teenager Michael Brown in Ferguson, Mo., and the fatal strangling of Eric Garner by a New York Police Department officer.

De Blasio ran for mayor in 2013 on a platform highly critical of racially charged police practices like stop-and-frisk, which primarily target New York’s African-American and Hispanic communities. After Ramos and Liu’s deaths, many NYPD officers blamed de Blasio for creating an atmosphere hostile to police.

Many NYPD officers controversially turned their backs on the mayor while he was speaking at the funerals for the two officers. As part of a “work slowdown,” the department has also partially abandoned its job of enforcing the law in the city, leading to a dramatic plummet in both arrests and summons. Traffic citations, for example, are reportedly down over 90 percent from this time in 2014.