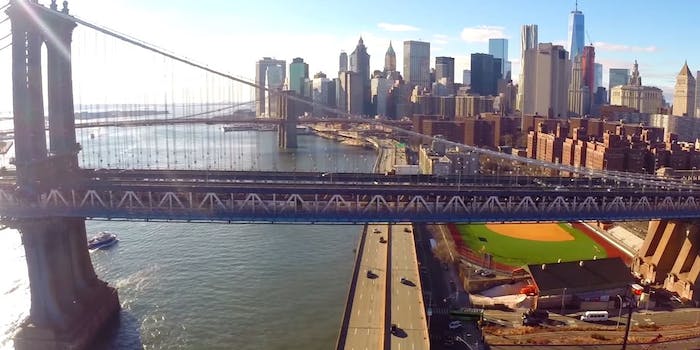 You won't find this stuff in Times Square.

When you hear “New York City,” what images come to mind? Times Square? The Empire State Building? The Statue of Liberty?

While such attractions are indeed key parts of the city’s enduring beauty and charm—and no doubt counted upon to draw in tourists from all over the world—there is much, much more to our country’s largest metropolis.

Sky Tech One Aerial Photography user Victor Chu realized this and decided to take his DJI Phantom 2 drone out for a true tour of his beloved city—in all five boroughs. Ride along with him as the drone checks out the Arthur Kill “ship graveyard” in Staten island, follows the Roosevelt Island tram into Manhattan across the Queensboro Bridge, and glides above the seemingly pristine coast of Orchard Beach in the Bronx. He even manages to get a perspective from inside the Unisphere at Flushing Meadows Corona Park, site of two World’s Fairs.

For the ultra-curious, Chu also included a behind-the-scenes video.

We can only hope that Chu—or drone enthusiasts like him—take their devices out into their own sprawling neighborhoods to capture the true essence of where they live, rather than what looks pretty on postcards.