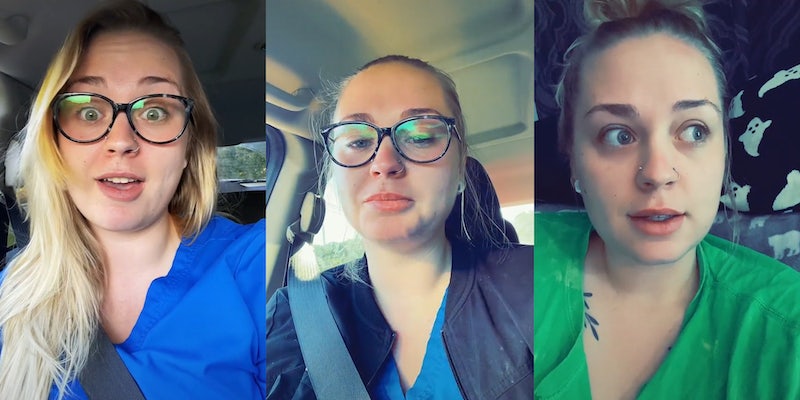 ‘You couldn’t even see the logo’: Worker says she lost job that she ‘loved’ because she made a TikTok, sparking debate

'Jobs need to realize that the people working there have lives outside of work.'

A woman on TikTok says she was fired from a job she loved because of a video she posted on the social media platform. On Sept. 28 the TikToker told her audience that said video was taken down because it was reported by the person who got her fired.

According to Keeley’s (@imjustkeeley) first viral video posted Sept. 23, she was allegedly flagged by her employer because she was angry in a video that is no longer accessible on the platform.

I lost my job because i was angry

Keeley received over 1 million views and 4,800 comments. Her story sparked a wave of criticism over youthful ignorance around policies and employment contracts, job accountability, and oversharing on the internet.

“There’s usually a social media policy that was probably violated,” says one viewer.

“I just started a new job. The first work rule was do not post about work on social media,” says another.

“You have your badge on in several videos, you’re constantly running your mouth on TikTok, but it’s their fault? Ownership is part of adulthood,” says a third.

The overall sentiment of comments is that people should keep certain aspects of their life private, and companies often have a right to fire people for the simple reason of not liking them, or legal reasons such as a violation of contract.

The viral video shared by Keeley stands out among several stories of TikTokers fired over content creation.

In June, the Daily Dot wrote a story about Tamara Khalifa, fired for recording a TikTok video while at work. Recently, Lexi Larson exposed her salary raise at a Colorado-based tech company for a TikTok trend called Salary Transparency. She was also let go.

Many bosses today examine the social platforms of their employees and make judgment calls based on what they see. Some employers add clauses to their employee contracts, often overlooked by younger new hires.

Occasionally in the comments, a viewer defends Keeley and says it’s a violation of her freedom of speech.

“Jobs need to realize that the people working there have lives outside of work and if the logo wasn’t showing there should be no issue,” says one viewer.

Since the pandemic, more nurse firings have taken place for misinformation on social media or wrongly disclosing information that violates the HIPAA privacy rule. Keeley has several posts in her nurse scrubs, some of which show her ID badge. In another TikTok video, she has a nursing textbook in her hand.

“You couldn’t even see the logo of where I worked,” she says.

Since the video of her crying about her lost job, she’s posted two more TikToks that provoked further controversy.

On Sept. 27, Keeley said she was mostly “pissed off” by how she was fired. In the post she gives no further explanation of why the video was taken so seriously.

“They called the cops on me twice,” Keeley says. “The second time was when I got fired, the first time was the day before.”

“Guys, the video was taken down. TikTok took it down because it was reported by the person that saw it and got me fired,” she says.

One viewer says her updates only leave “the rest of us who didn’t see it, really confused.”

At the end of the Sept. 27 post, Keeley says the place she worked was a really toxic environment and she’s glad she no longer works there—a contrast to her initial claim of losing a job she loved.

The Daily Dot has reached out to Keeley via TikTok comment.