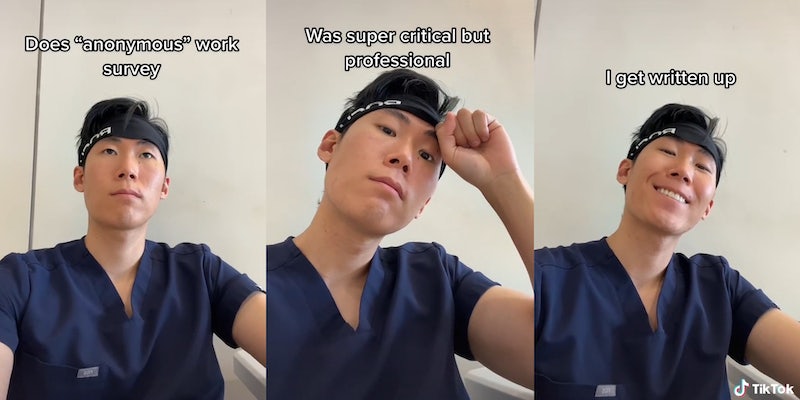 ‘Anything that comes from ‘work’ is NEVER anonymous’: Nurse says he got in trouble for response to ‘anonymous’ work survey

'It should be illegal to claim the survey is anonymous when it’s not.'

A nurse says his manager asked to meet with him after he was “critical” in his responses to an “anonymous” survey in a now-viral TikTok.

In the video posted by TikToker Alex (@nurse.alexrn) on Thursday, he says that he “got in trouble” after filling out a survey that was supposed to be anonymous about what he “doesn’t like about work.”

“I got an email from my manager saying ‘take this anonymous survey,'” Alex says in the clip. “I was super critical on that survey, but also very professional.”

Alex says that the next day his manager asked him to meet about his responses, which he refused. When he brought up that he thought the survey was “anonymous,” he claims his manager said they still “track” the respondents.

“My manager tried for a solid two and a half weeks to get this meeting with me,” Alex says. “In the end, I just got written up for something stupid and that was it.”

The storytime has reached over 219,000 views as of Monday, with commenters putting his manager on blast for not honoring the anonymity promised to the respondents.

“It should be illegal to claim the survey is anonymous when it’s not,” one commenter said.

“If they’re mad about the feedback I give them when they asked for it, they’re the ones that need to do better,” another wrote.

Others warned against filling out “anonymous surveys” at work, sharing their own stories of alleged “workplace retaliation” after completing one.

“Obviously they DO track you. Now you know anything that comes from ‘work’ is NEVER anonymous. It helps them cull any ‘trouble makers,'” one user wrote.

“This happened to me too. Smh never again have I done their surveys,” another said.

“I work in medical and I tell my coworkers all the time these surveys are never anonymous ever,” a third added.

The Daily Dot reached out to Alex via email.

Update 5:15pm CT June 27: In an email to the Daily Dot, Alex clarified that this incident took place over a year ago with a former employer.