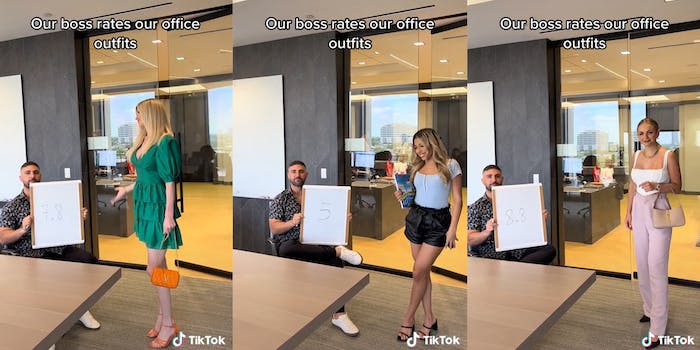 ‘Seems like a lawsuit waiting to happen for him’: Boss rates workers’ outfits as they walk in, sparking debate

'This is just 1 nanosecond from being an HR complaint (at best).'

In the video, TikTok user Aliona shows someone she claims is her boss writing scores for every person’s outfit on a whiteboard as they walk through the door.

While the video is a joke, the dialogue surrounding the TikTok has been fierce, with many questioning the ethics of engaging in this behavior.

The video currently has over 2.8 million views.

In the video, the male boss gives ratings to the employees, most of whom are female. The lowest score is a five, while the highest scores are in the eights.

Comments exploded with a discussion about the video. Some took a negative view on the video, even if it is a joke.

“Seems like a lawsuit waiting to happen for him,” one user wrote.

“This is just 1 nanosecond from being an HR complaint (at best) or a lawsuit (at worst),” another added.

“I had a supervisor fired for that about 25 years ago. That exact thing,” a third alleged.

Others joined in on the rating, with many alleging the outfits did not seem appropriate for work.

“1 and 3 are not work appropriate, are they going to the club or something,” a user asked. “They’re cute tho!”

“No open shoes, no short dresses, no shorts, no to short and revealing tops in the office,” a second stated. “Only closed pumps, and a guy was dressed 8.”

“The first one is the nicest,” a commenter offered. “however none are appropriate for work except the guy.”

In the comments section, Aliona revealed that “we are real estate agents” in an office that “[doesn’t] have a dress code.”

Further users felt that commenters were overreacting and that Aliona and her co-workers were simply having a little fun in the office.

“These comments didn’t pass the vibe check,” a user shared.

Aliona apparently joined in with this part of the discussion, posting a joke response to a comment featuring her own rating of six. “When you spent 1 hr deciding what to wear and your boss gives you a 6,” she wrote in the text overlaying the video.

The Daily Dot reached out to Aliona via Instagram direct message.