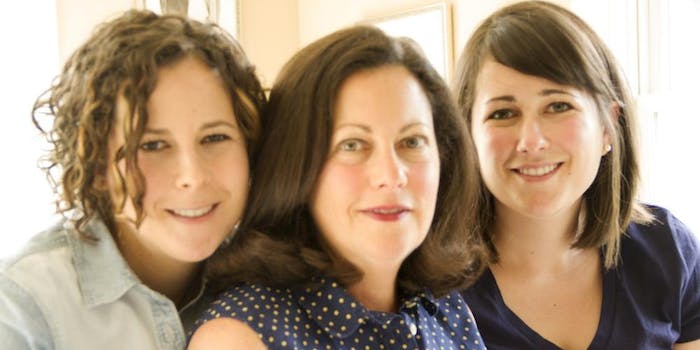 Not Alone wants women to share their abortion stories online

One in three women have had abortions before the age of 45. These are their stories.

When Sherry Merfish was 20 years old, she found out she was pregnant. This was in 1972, a year before Roe v. Wade was decided. So she traveled from her hometown in Austin, Texas, to New Mexico, where she found a doctor who performed abortions.

“It was a horrible experience,” she says as I speak to her more than 30 years later, recalling the experience in her sharp Southern twang. “He treated me like I was damaged goods, and the nurse practitioner sort of dismissively gave us birth control information with the sense that we’d be back there again. It was very pro forma, and not at all kind. It was as if I was being punished.”

For years afterward, neither Sherry nor her now-husband told anyone about the abortion, aside from her daughters right before they went to college. But in 2013, the summer that Sen. Wendy Davis’ now-legendary filibuster in the Texas State Senate, Sherry’s story was thrust in the spotlight when her daughter, Beth Matusoff Merfish, wrote a piece called “My Mother’s Abortion” for the New York Times.

After the piece went viral, Merfish was stunned by the number of emails and letters she received from women who had read her story, many of whom had also had abortions but had, for whatever reason, never spoken publicly about them. She became convinced that women needed a platform to share their abortion stories, one that was free of judgment or censure.

“[Abortion] is a common experience. One in three women have had an abortion before the age of 45,” Merfish says, citing a study from the Guttmacher Institute. “There is a recurring theme of isolation and shame in women’s abortion stories that stands out for me every time, because it’s just wrong, and it’s wrong that the other side has put us in the shadows. We cannot be there anymore.”

To bring women’s abortion stories out of the shadows and into the light, in the summer of 2013 Merfish and her daughters Beth and Brett launched Not Alone, a website where women (and men) post their abortion stories on YouTube. Last summer, Emily Letts, whose video recording of her own abortion went viral earlier this year, also joined the site.

After her abortion video went viral, “so much of the attention was focused on me: on what I looked like, on my dating life,” Letts, who is currently studying to get her masters degree in public health and social work, told me over the phone recently. “I wanted to take this spotlight that I had and shine it on where it needed to be shone, on what [my story] means for women in America and why we need to share our stories to destigmatize abortion.”

On Not Alone, women and men alike—”We feel men are not part of the conversation, even though obviously this choice affects them too,” Merfish says—are invited to post video recordings detailing their own experiences with abortion. There’s only one requirement for posting a video: That the poster reveal his or her face in the clip. “We knew of platforms where women wrote [abortion] narratives that were anonymous, which fed into the mythology, the stigma, that this was something you could not attach your name or face to,” Merfish says. “With Not Alone, we decided to change that.”

Aside from the visibility of the men and women in the videos, there are few common threads to the 30-plus abortion stories on Not Alone. The men and women who share their stories come from a variety of economic and racial backgrounds, and their feelings about their abortions before and after the procedure are equally wide-ranging.

There’s the story of Emily M., a formerly promiscuous young woman from London who discusses in painful detail the physical and emotional trauma she experienced after her abortion. There’s the story of Marlene, a Dominican woman who says she would’ve regretted carrying her pregnancy to term far more than she regretted having her pregnancy terminated. And there’s a story from Letts’s own mom, titled “My Mommy’s Abortion.”

Many of these stories are frank, some alarmingly so, and one would be forgiven for assuming there might be an exhibitionistic or performative streak to all this, to publicly sharing the details of an event that is typically considered so private. But Merfish and Letts reject that criticism.

“Many people ask me [about Not Alone], ‘Don’t you think this is a private decision and you should be private about it?’” says Merfish. “And I say, ‘In an ideal world, yes, this should be private. But by being quiet, we are losing our voices.’ The other side is vicious and relentless, and when a woman speaks up about her abortion without regret, without shame, without fear, she is able to inspire other women to do the same.”

The point of showcasing so many voices is to put a human face on the one in three statistic—an aim that’s all the more pressing given the current political climate, which is placing increasingly draconian restrictions on access to reproductive health care. (Texas, for instance, recently passed a law forcing 34 of the state’s 41 licensed abortion providers to shut their doors, leaving more than 900,000 Texas women with no abortion providers within an 150-mile radius.)

Yet despite the recent onslaught of restrictive abortion legislation, Letts believes the cultural climate is shifting in favor of the pro-choice side, citing the movie Obvious Child and political figures like Sen. Davis and Nevada assemblywoman Lucy Flores coming forward with their own abortion stories as examples. “This is exactly what sparked the shift for the gay rights movement: People started to come out and say they were gay,” she says. “That’s what we’re gonna be seeing: more and more people sharing their abortion stories on a national level.”

For her part, even though sharing her abortion story has drawn the ire of anti-choice activists, Merfish doesn’t regret having done so for a second. Although she was concerned about how her pro-life family members would respond when her daughter’s New York Times op-ed came out, the support she received from the rest of her family, as well as the women who wrote to her thanking her for telling her story, was “so empowering.”

Telling her abortion story, says Merfish, was “long-delayed”—perhaps an understatement, considering she had the procedure more than 35 years ago. But even so, “I would not have been able to predict how freeing it was [to tell my story],” she says, adding: “Because now, I don’t have any more secrets.

Photo of Brett, Sherry, and Beth Matusoff Merfish via Not Alone