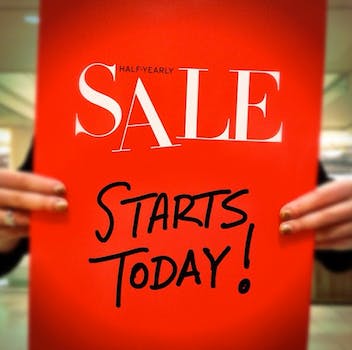 Nordstrom has a message for the post-Thanksgiving shopping frenzy: GTFO.

Nordstrom has a message for Black Friday: GTFO.

On its Facebook page, the upscale retailer said it won’t be indulging in the post-Thanksgiving shopping rush. Rather, Nordstrom is choosing to take it easy on the kickoff of the holiday shopping season.

Collecting 27,000 likes in a week, the post is a picture of a sign adorning store locations, explaining why Nordstrom will open at a reasonable hour Friday morning, and definitely not Thursday evening.

“We just like the idea of celebrating one holiday at a time,” the sign said, adding that it won’t join other retailers such as Gap, JCPenney, and Walmart, all of which are opening the night of Thanksgiving. “On Friday, our doors will open to ring in the new season with style.”

A search on its website shows that stores open their doors 8am Friday.

In the past, Nordstrom has not celebrated Black Friday with special sales or doorbuster savings. The overly publicized day is “not really something we promote,” a spokeswoman told Women’s Wear Daily.

Amid the rising tensions between other stores and workers for blurring the definition of when Black Friday begins, the post has struck a chord with its fans.

“Good for you, Nordstrom! I wish more merchants would follow your lead,” wrote Leslie Dawson. Her message echoed that of the other 1,200 comments generated on the post.