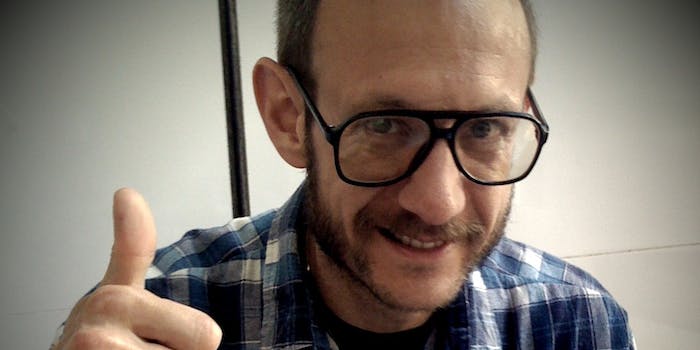 Can #NoMoreTerry curb Terry Richardson’s power in the fashion world?

Warning: This story contains sexually explicit content that may be NSFW.

No matter how many sexual assault allegations are leveled against him, celebrity photographer Terry Richardson is such a ubiquitous presence in showbiz that he’s almost impossible to avoid. But thanks to an online campaign headed up by popular fashion blog OMG That Dress, some people are going to give it a try.

Stories of Richardson’s inappropriate behavior toward models have circled the Web for 10 years. (Vocativ has a helpful “Timeline of Skeez” here.) Most recently, former art student Charlotte Waters, now 24, wrote a confession on Reddit detailing her first and last shoot with Richardson, when she was a teenager. She recounts the experience for Vocativ:

I don’t even really remember what specific things were happening at that point, but he was directing everything. Like, “OK squeeze my balls,” “OK, put my dick in your mouth,” “OK, now kiss me.” It wasn’t intimate. He also straddled me and started jerking off on my face.

Waters is far from the only one to share stories like this, but nothing so far has damaged Richardson’s career. The #NoMoreTerry campaign aims to destroy some of Richardson’s power in the fashion world by actively boycotting any business or celebrity that hires him.

In a Tumblr post on Tuesday, OMG That Dress wrote: 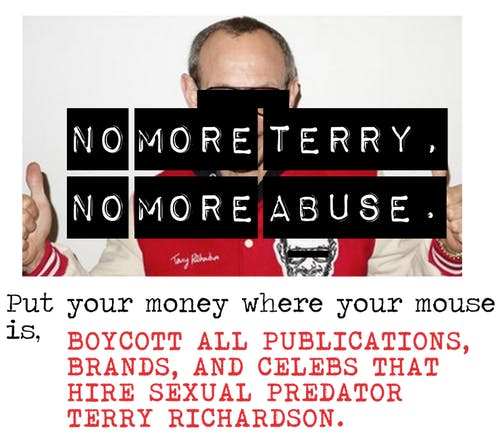 He is a known predator who shows no sign of stopping his ways, this all on top of a photography “style” that relies on objectifying and degrading women. His treatment of female models isn’t exactly new, and there have been plenty of calls for him to be stopped before. We can sign a million change.org petitions, but Terry Richardson just won’t fucking die.

The campaign already seems to be catching on. Many people have tweeted support:

A lazy photographer who constantly sexually assaults models. Why is he still getting work? #NoMoreTerry

The people in power need to recognise the abusive behaviours of this man and act accordingly. #NoMoreTerry

As OMG That Dress points out, this isn’t the first time people have spoken out against Richardson. Last year 25,000 people signed a petition for major brands like H&M to stop hiring him, and there have been multiple public accusations leveled against him from former employees and models.

Considering the fact that Terry Richardson photos still sells magazines, it seems like a boycott may actually be the smartest strategy against him. The question is, will the #NoMoreTerry campaign gain enough popularity to make any difference?