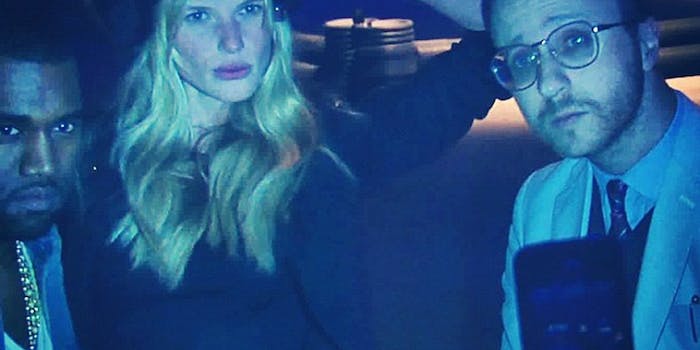 In a new YouTube video, Kämer tells celebrities he nefariously edited their Wikipedia page and will only remove said edits for a hefty fee. Wikipedia's not laughing.

Television writer, Israeli sitcom actor, and published poet Nimrod Kämer has a notable backstory worthy of a Wikipedia entry. But he’s currently facing deletion on the site for what he claims is a “vendetta.”

British tech blog The Kernel calls Kämer’s work “art terrorism,” but he prefers to think of himself as a “postmodern artist,” modeled in part by Twitter prankster Tommaso De Benedetti. He’s fine with the descriptors “performance artist” and “cultural critic,” but don’t compare him to Borat actor Sacha Baron Cohen.

“Sacha is now a bit passée, no?” typed Kämer to the Daily Dot in a private chat. “He paid two security guards to throw him out of Academy Awards’ red carpet thing, and his new film, The Dictator is just like any other Adam Sandler mundane rom com.”

Kämer is certainly no stranger to insulting celebrities or making enemies. His last project had him confronting celebrities in person and telling him why he unfollowed them on Twitter. His most recent effort is also celebrity-centric and equally insulting.

And it trapped Kämer on Wikipedia’s bad side.

Kämer explains the purpose of the project is to show how easily he can “extort” celebrities to edit their Wikipedia pages. Kämer says he was also trying to point out how easy it is to make changes to Wikipedia.

Rapper Kanye West was especially tickled pink by Kämer’s attempt at extortion. In that instance, Kämer told West he deleted mentions of West’s involvement with the murder of rapper Notorious B.I.G. West goes on to tell his entourage, on camera, to get Kämer’s contact info, because “he knows how to work Wikipedia.”

Kämer is boastful of his Kanye meeting in our interview, calling the experience “ridic,” (short for ridiculous), and shows me the email he received from West’s people.

“Kanye wanted to hire me,” he added.

As amused as Kämer is by his own antics, Wikipedia’s staff is not. They’ve launched a sockpuppet investigation into Kämer’s celebrity edits and are currently voting on deleting Kämer’s page on the grounds that it is a “vanity” page that doesn’t satisfy “inclusion criteria.” (Wikipedia did not respond to repeated requests for comment.)

“Then the wiki moderators said it’s violating several criterias and rules and traced all the changes I’ve made and as punishment put my own page up for deletion,” Kämer typed.

One British Wikipedia contributor WilliamH even wrote in the comment section of Kämer’s sockpuppet investigation page in regards to the deletion of Kämer’s page, “[I]t’s bleedin’ obvious it’s an autobiography.”

However, Kämer denies writing his own Wikipedia page, saying he only tweaked it. Looking at the history of his Wikipedia page reveals at least 15 other contributors and editors contributed to his page, so Kämer’s claim, that he didn’t write or edit all of it, holds some merit.

Kämer’s most recent edit? He tried to delete the word “gonzo from his page,” since Wikipedia editors and moderators appear to be mocking the word in the comments section of the sockpuppet investigation page.

“[T]hey made it clear they are anti-gonzo journalism, but they blocked me from editing,” Kämer  wrote.

“Wikipedia is full of non-notable people but they’re now on my case. People like Robert Kiyosaki, or Gorilla Monsoon should be deleted before I do.”

Kämer is anguished by the whole ordeal.

“I am left in the trenches” he said, adding that Wikipedia has no platform where he can plead his case to the appropriate editors and moderators. Kämer acknowledges he is attached to his Wikipedia page, as it is way of verifying who he is and what he has accomplished.

“It comes up first in Google, and people believe it,” Kämer wrote, before going into a rant about Wikipedia being “pure publicity when it comes to show biz.”

“So I say – why shouldn’t Kanye pay for this full biographical life-long service?” Kämer asked.

In fact, Kämer believes “celebs should pay for positive lengthy well researched wikipedia pages about them,” adding celebrity Wikipedia pages are “more valuable than a website.”

If that’s the case, what sort of price tag would Kämer put on his own page?