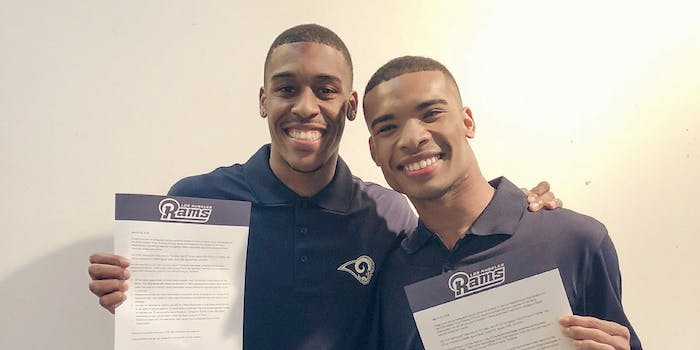 When it comes to the NFL’s first male dancers, the internet is split

Many see this as a distraction from the NFL's unjust protest policies.

This year, the NFL is getting its first-ever male cheerleaders—well, dancers, really. Both the Los Angeles Rams and the New Orleans Saints have taken on male dancers to cheer within its all-women teams.

According to CNN, dancers Quinton Peron and Napoleon Jinnies joined the Rams’ cheerleading squad after team auditions in March. At the time, Peron, who is also a choreographer, told Good Morning America that he wanted to try out after watching Lakers Girls dance at a Lakers game, and wondering what was stopping himself from doing the same.

Jesse Hernandez, a new member for the Saints’ Saintsations cheer team, was inspired to try out for his team after reading about Person’s and Jinnies’ auditions in an article sent to him by his mother.

“She told me that it was my time to shine,” Hernandez said about his mother in a YouTube video posted before his final audition.

While NFL teams such as the Indianapolis Colts and the Baltimore Ravens have stuntmen who perform alongside cheerleaders, the NFL has never had men dance as part of its teams.

Amid the boos and hisses from dissenters online, often coming from a place of homophobia, having men participate in a traditionally feminine space, cheering on a sports team with dance moves, feels like a step in the right direction. Particularly for the NFL and football—which indirectly advocates for the hypermasculinity of men and the degradation of femininity and women (a la football players given a slap on the wrist for domestic violence charges)—having men visibly take on an aspect of femininity is a win for viewers.

Finally, this heavily-gendered sports space, in which men are the aggressors and women support the men’s performance while also being objectified entertainment, might find itself a few more inches toward equity and inclusion of people other than the straight, male football fan.

However, that’s not to say that the NFL’s inclusion of male dancers lets the organization off the hook for its previous controversial decisions, namely fining football players who decide to kneel during in protest of police brutality during the national anthem.

Fuck the NFL. But also fuck the homophobic fans who are okay with domestic violence, sexual assault, and rampant consussions. NONE of that was an issue, but now male dancers (WHO PROBABLY ARENT ALL EVEN GAY) are the biggest issue in the industry. Goodfuckingbye

And while a win for male dancers, sometimes within the LGBTQ community, isn’t supposed to be equated as a loss for Black athletes (both Jinnies and Peron are Black), some Twitter users are seeing it as an effort to distract from the NFL’s anti-Black protest stance.

One of my FB friends had this to say about the NFL having the two male cheerleaders. Let’s talk pic.twitter.com/hiEu1VvQcf

With any hope, male dancers, female leaders, and Black players can all continue to succeed in the league—but also have their concerns addressed and and not undermined.