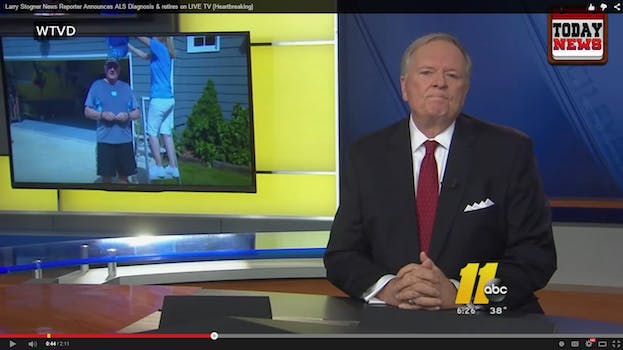 This is genuinely heartbreaking.

For close to 40 years, Larry Stogner delivered the evening news to the people of Raleigh, N.C., on WTVD-11, the area’s ABC affiliate.

“Boy, we’ve seen a lot of change over those years. But, we have to stop meeting this way,” Stogner said in a pre-recorded message to his viewers and colleagues. “As it turns out, I have ALS. Lou Gehrig’s Disease.”

Stogner went on to note recent changes in his voice and delivery and also brought up last summer’s Ice Bucket Challenge, which “raised over $100 million” for ALS. Many would argue that the Ice Bucket Challenge quickly lost its focus, becoming more about goofy videos of people dousing themselves with water and less about the disease it was supposedly helping fight.

Stogner’s story—and the tears he was fighting back while telling it—illustrate the cold, hard truth about the incurable disease.