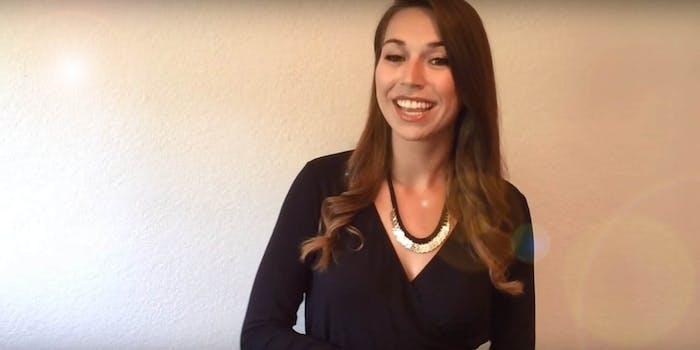 Marijuana may be decriminalized in some states, but that doesn’t mean employers will turn the other cheek to an employee’s usage. Former local Oregon news anchor, Cyd Maurer, experienced this firsthand when she was fired from Eugene’s ABC affiliate, KEZI-TV.

The 25-year-old University of Oregon graduate was let go from her position in May, following a positive drug test for marijuana. According to Maurer, she was rushing to work and accidentally “tapped” the back bumper of a car in front of her. Upon finding out about this minor traffic accident, the station demanded that she take a drug test. On her newly opened blog, Ask Me About Marijuana, she claims that the decision to terminate her employment came from a corporate attorney and that her supervisors, “who actually told me they wanted to keep my job,” were not responsible for the firing. She maintains that her recreational usage of marijuana did not have a negative impact on her job or performance abilities as a news anchor.

She says, “I’m educated and responsible. I’m a woman. The vast majority of people who meet me would never in their wildest dreams assume I use marijuana. But I do. And I’m tired of hiding it—and in fact, now I want people to take notice.” In addition to the blog post, she recorded a video that explained the unexpected trajectory of news anchor to visible marijuana advocate.

In a way, the loss of her job is a minor setback, a chance to finally address the hypocrisy of public dissenters of marijuana use. In a blog post for Marijuana Politics, Maurer writes:

Comments that clearly misinterpret my message have been disheartening, but they have also resulted in something incredible: a dialogue. That’s exactly what I wanted to happen… Because of the facts, the social acceptance of cannabis use is inevitable, but it is only possible if people take a stand. The more we educate and expose people to the truth about cannabis, the faster social change will come.

In her first blog interview with Marijuana Politics, Maurer provides details about her upbringing (youngest of four siblings, raised Catholic, AP high school student, athlete); the trajectory of her professional career (started at the station at the end of August 2013); and her memories of the first time she tried cannabis (initially learned about it from D.A.R.E., really started to use on a regular basis in college).

The state passed Measure 91 last month. It legalized the possession and consumption of cannabis for all adults age 21 and over in Oregon effective July 1. However, this is not a law that is universally accepted by workplaces. The Colorado Supreme Court ruled that, despite the legalization of marijuana, an employee could still be fired after failing a drug test.