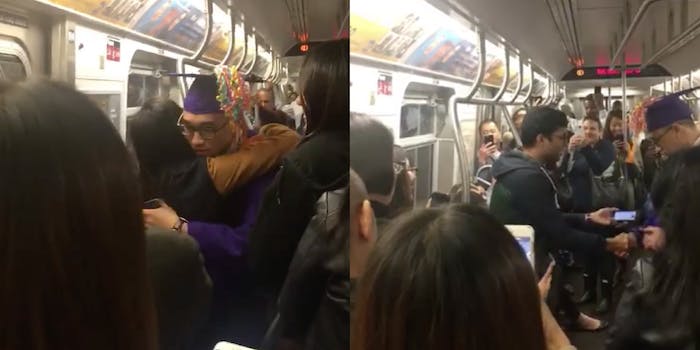 Looks like he 'had the time of his life' after all.

The feeling of walking across the stage at college graduation is a mix of excitement, relief, and vindication. The same could be said for finally getting out of a crowded subway car after being stranded underground for hours.

And even though nursing student Jerich Marco Alcantara only experienced the latter of the two situations while on his way to the former, he was still able to symbolically celebrate with the help of the commuters stuck with him.

A viral Facebook video of the recent Hunter-Bellevue School of Nursing grad shows him receiving an impromptu graduation ceremony after being stuck for two hours on a New York City train. The delay subsequently made him miss his own ceremony at Radio City Music Hall, the Cut reported.

According to Alcantara and his girlfriend, Layla Batenga, they had left for the ceremony two hours prior to the beginning of commencement—which, in New York, is plenty of time to get across several boroughs to Manhattan. But as all New York commuters know, merciless train delays are liable to strike at random, for even hours at a time.

In the video, Alcantara stands in the center of the train in his purple and yellow regalia, as someone queues up Green Day’s “Good Riddance (Time of Your Life).” A friend then presents him with his diploma (on a phone screen) and shakes his hand, while few other people record in the background.

He then goes hugging friends and strangers around him, but not before offering to share this momentous “time of his life” with the stalled car’s passengers.

“If you want a copy of my diploma, turn on your Airdrop,” he says.

Poor kid missed his graduation because of the train delay this morning….so we threw him a graduation on the train.