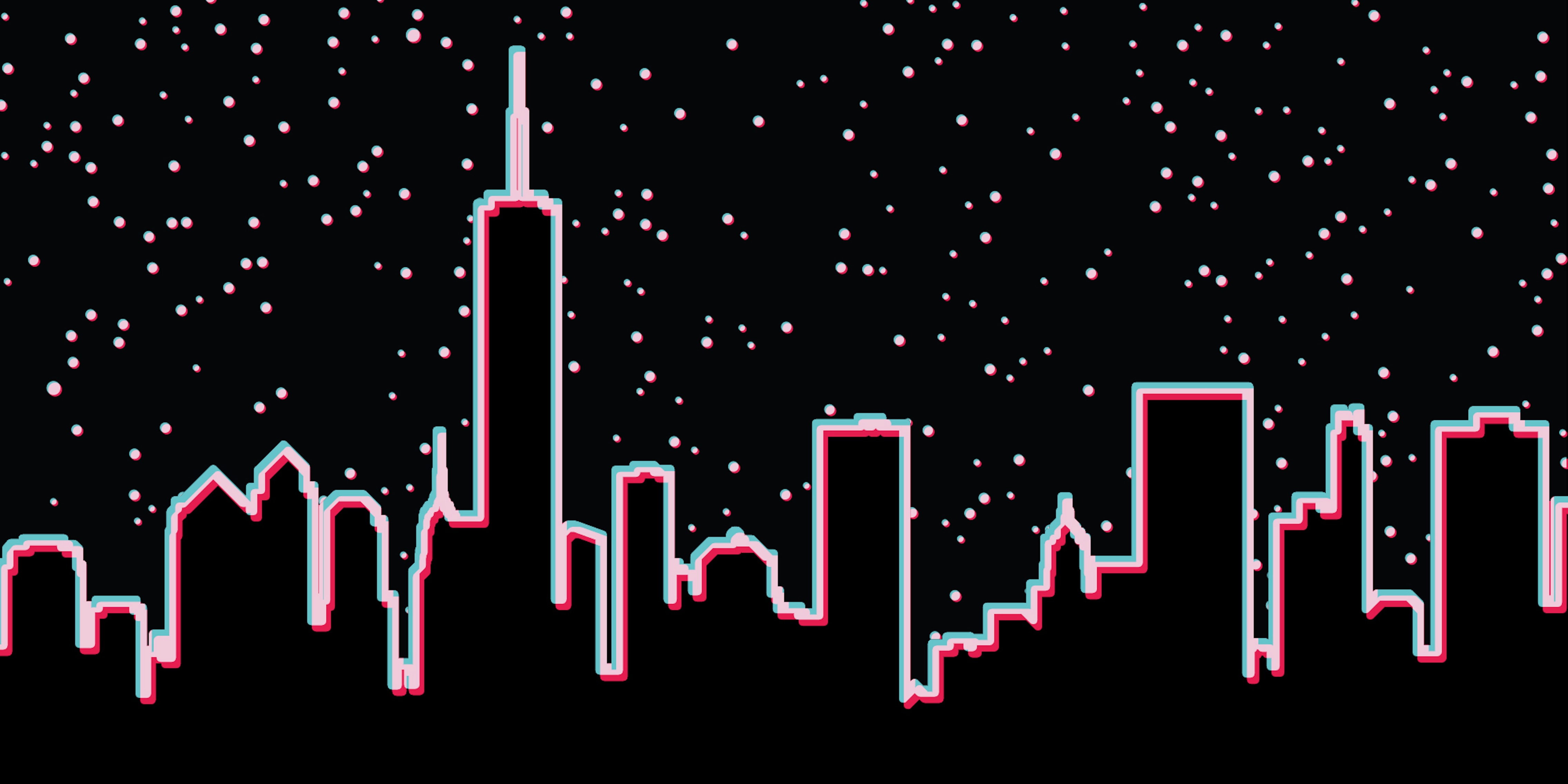 'People who have any sort of means rise to the top.'

In May, Grace Pinegar received an email from her landlord informing her that her New York City apartment’s rent would increase by $700 if she decided to renew her lease. Her landlord justified the rent hike because “it’s what the apartment’s worth.”

So, like other New Yorkers frustrated with rising rents in the city, Pinegar turned to TikTok.

In her video, Pinegar shows her landlord’s email and then repeats the phrase “it’s what the apartment’s worth” while showing all the elements of her apartment building that she finds unworthy of the rent increase: a graffitied entryway, mailboxes with apartment numbers written on them in Sharpie, dirt, and grime on hallway floors, exposed and rusted pipes, chipped wood floors and walls, peeling paint, and cockroaches.

“Don’t move to NYC right now,” Pinegar wrote in her video’s caption. In a June interview with the Daily Dot, Pinegar said that she hopes that viewers of her TikTok know that “tenants have more rights than landlords and property managers would like for us to believe.”

Many New Yorkers identified with James’ frustration and used her sound in their TikToks about rent increases. Others independently posted about their rent hikes, with some saying that they felt extorted by their landlords.

With all of those videos, views, and comments, TikTok is one of the main places where New York City real estate is discussed online. Tips and tricks are shared quicker than they could be in Facebook groups and Reddit threads, thanks to TikTok’s hyper-localized algorithm.

The price of living

New York-based TikTokers aren’t exaggerating: It is really expensive to live in the city.

According to an October 2022 National Rent Report from Zumper, an online apartment rental platform, New York City is the most expensive place to rent in the country. The median rent for a one-bedroom apartment is $3,860; the next highest median rent for a one-bedroom in Boston is $800 less. The median monthly rent nationwide was $2,002 in September, reports Rent, a site that produces research surrounding housing.

And though New York prices have always been higher than other cities, the city’s available low- and middle-income housing has hit a 30-year low, and New York’s Rent Guidelines Board voted to raise rent-stabilized apartments’ yearly rates by at least 3.25% in May. “Rent stabilized” means landlords are unable to increase an apartment’s rent unless under specific circumstances.

Plus, almost 90,000 rent-stabilized apartments were vacant in 2021. Evan Rugen, known as @boweryboi on TikTok, says with fewer apartments available for rent and demand for apartments in the city remaining consistent, landlords will raise rents.

Rugen shows the effects of the decreased supply of available apartments in his TikTok videos. In a July TikTok, Rugen said that over “200 people showed up” to tour an East Village apartment he was showing. (Anecdotally, when touring apartments in Manhattan and Brooklyn, a real estate agent is usually accompanied by only one or two renters.)

“This New York City rental market is ridiculous,” Rugen says in another viral TikTok about vacant, rent-stabilized apartments. He says that because landlords can’t increase the apartment’s rent, they don’t renovate the apartment and choose instead to have the units vacant. “We need to make these apartments available at a rate where landlords can cover their mortgages.”

Not everyone agreed with Rugen’s take on the situation. A popular TikTok stitch of his video calls his line of thinking “landlord propaganda.” But in an interview with the Daily Dot, Rugen said he’s not a “landlord advocate”—nor is he a “tenant advocate.”

Making light of a bad situation

Trina Notaro has been on the receiving end of more expensive rent from her landlord. In July, Notaro posted a TikTok using Pinegar’s “it’s what the apartment’s worth” TikTok sound announcing that the rent of her Williamsburg, Brooklyn, apartment—which has flooded and been infested with cockroaches and rats—is increasing by $800.

“As renters, we are told rent increases happen because of the market’s value,” Notaro told the Daily Dot. “But the ‘market’ does not address the current issues within an apartment.”

Notaro kept her TikTok followers updated on her apartment woes throughout the summer and said in August that she found out her apartment, which was originally $3,000 a month, wasn’t even listed at $3,800, which is what her landlord asked for her to renew her lease. It was listed at $4,700 a month.

“The greedy bastard,” Notaro says of her landlord in her TikTok. “And is he gonna put $1,700 worth of improvements into this place? No.”

She told the Daily Dot that used TikTok to talk about her rent increase not only because she wanted to “make light of a bad situation,” but also to use her platform to speak up about what she felt was an injustice.

“I knew the only way to speak out on this matter that I believe is willfully unfair, and to show people in a similar situation they are not alone was to leverage my voice on TikTok,” Notaro told the Daily Dot.

The rent increase coupled with the “scale of pest infestation” caused Notaro and her roommate to move out of their Williamsburg apartment once their lease expired. She told the Daily Dot she found a more affordable apartment 4 miles away in Sunnyside, Queens, using Hotpads.com.

Madison Raye Sutton, a New York real estate agent with over 100,000 followers, makes videos on her TikTok account, @thenycagent, to help out people like Notaro. Her videos cover how to renegotiate your rent if it has increased and how to find rent-stabilized apartments, and encourage tenants to discuss “apartment/building issues and what they’re paying in rent” with their neighbors.

Like fellow New York real estate agent Rugen, Sutton says she remains neutral regarding tenants versus landlords and posts tips for apartment hunting on TikTok because “everyone should have an equal playing ground.”

“If I would have seen videos that are similar to my style when I moved here, I would have saved a lot of money,” Sutton told the Daily Dot.

Sutton says New York real estate TikTok is so popular because millennials and Gen Z use TikTok like a search engine. In response, she creates sharable, hyper-localized content relevant to the city’s real estate market. It’s paid off: Sutton says that in 2021, almost 100% of her non-referral business came from TikTok.

Though younger New Yorkers use TikTok to find housing, the city’s public advocate, Jumaane Williams, cautions those looking to move into the city to always do their “due diligence” when securing housing using any form of social media. In an interview with the Daily Dot, he also said that the city “needs to do a better job of public awareness and education” surrounding affordable housing so that people aren’t just relying on TikTok.

“There has been just utter failure on every level of government,” Williams said of the current state of New York’s housing landscape.

And he feels social media platforms like TikTok have made things worse because they have heightened the competition in the housing market.

“We’re now picking up hyper-competition on scarcer and scarcer units,” Williams told the Daily Dot. “And people who have any sort of means rise to the top in that.”

In August, Coalition for the Homeless reported that there were over 55,000 unhoused people in New York City’s shelter system. That’s about 30,000 fewer people than there were vacant rent-stabilized apartments in 2021.

As for social media and TikTok’s role in that discrepancy, Williams said he knows the popularity of using such platforms to find housing isn’t going away.

“We just have to do a better job educating folks on how to use it better,” Williams said.