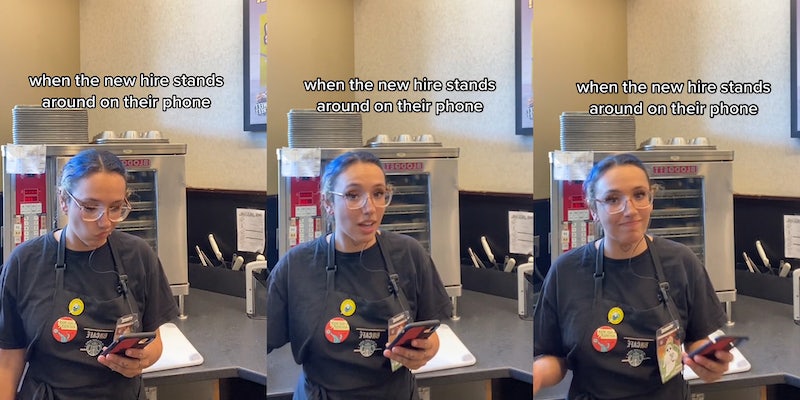 ‘This is a veteran privilege’: Barista calls out new hires who use their phone on the clock, sparking debate

'I had to prove my worth and earn the right to violently slack off.'

A Starbucks barista sparked a debate in the comments after she posted a video about new hires being on their phones.

In the five-second clip, user @jorlala records herself glued to her phone at work. The overlay reads, “when the new hire stands around on their phone.”

She then looks up and mouths a popular TikTok sound: “it’s cool when I do it. It’s a problem when they do it.”

@jorlala jokingly called phone usage “a veteran privilege, you’ve been here 4 seconds,” as she described in the caption.

@jorlala that is a veteran privilege, you’ve been here 4 seconds #barista #newhires #coworkers #worklife #relatable ♬ its cool when I do it – Connie

User @jorlala regularly creates content about her life working as a barista for her 60,000 followers. This video, however, quickly racked up over 806,000 views, resonating with viewers. Many of them sided with the barista, agreeing that new hires don’t understand the boundaries of phone usage.

“They just do it at the wrong times og’s know when we can chill and when to get back to work,” one viewer wrote.

“I’ve had people go on their phone their first day, like cmon,” a second complained.

“every new hire is always on their phone more than me like youre makin me do all the side work here,” a third said.

Others argued that new hires need to “prove” themselves before immediately pulling out their phones.

“They be trynna take they phones out when they see me on it i be like nah you can’t do that,” one commenter added.

“Like I had to prove my worth and earn the right to violently slack off, you don’t have the privilege yet,”  a second agreed.

However, some viewers disagreed with @jorlala’s sentiment, calling it hypocritical.

“No bc if you’re doing so am i,” one person commented.

“Once I see you on your phone my ass going on,” a second concurred.

A third user argued that if one doesn’t want new hires to be on their phones, then “veteran” employees have to set an example. “Nah y’all need to model what y’all want, i remember management complaining about this w the new girl and i was like well y’all are literally on yours,” they said.

The barista responded in a comment, agreeing that management frequently gives hypocritical commands. “Me when the managers stand around and then yell at me for standing lol,” she wrote.

The Daily Dot reached out to @jorlala via TikTok comment.