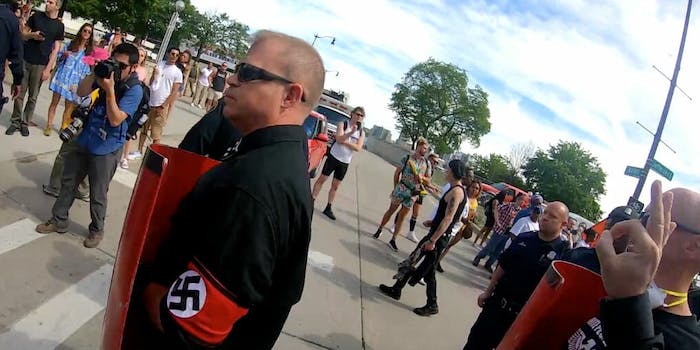 Members of the neo-Nazi group flashed swastikas and carried firearms at the march.

A Pride parade in Detroit, Michigan, was disrupted by a group of neo-Nazis who marched with Nazi flags and were escorted by the police, according to videos on social media that surfaced this weekend. In response to backlash, police said they kept the parade from escalating to “Charlottesville 2.0.”

Members of the National Socialist Movement (NSM) were seen openly carrying firearms—which is legal in Michigan—while marching against Saturday’s parade after announcing on their website that they would be present.

“They wanted something even more substantive than Charlottesville,” said Detroit’s police chief James Craig on Monday, referring to the 2017 Unite the Right rally in Charlottesville, Virginia, that left one dead. “That’s according to credible intelligence we received.”

Twitter user @marcklock, whose bio says he is a Detroit volunteer for Democratic presidential candidate Andrew Yang, shared a video of the incident on Saturday.

“Thanks Detroit Police Department,” Prozinski wrote. “While you were clearing a path for Nazis to march in downtown Detroit, you got your disgusting fingerprints all over me.”

Thanks Detroit Police Department. While you were clearing a path for Nazis to march in downtown Detroit, you got your…

“The LGBTQIA+ community gathers during the month of June to celebrate our accomplishments as a community,” user Rolando Fajardo wrote on Facebook about NSM’s presence at the parade. “Because our community has historically faced so much oppression and violence, we must remind ourselves and others how far we’ve come and also provide a safe space for those who cannot express themselves elsewhere.”

Prozinski, Fajardo, and @marcklock did not immediately respond to the Daily Dot’s requests for comment.

As videos and social media posts circulated, some people referred to an April post by Burt Colucci, who currently runs the NSM, where he announced the group will be “armed” and “counter-protesting the freaks.”

“We go in with Swastikas blazing and if people don’t like it, tough shit,” Colucci wrote on VK, a Russian social media site.

Blaze with swastikas they did. Numerous videos posted on Colucci’s VK account on early Monday showed the neo-Nazis hurling racist slurs such as the N-word, flashing the sign for white supremacy, and saying “Fuck you, faggots,” at the parade.

Police shielded the group and slowly pushed against parade attendees protesting the white supremacists. One video showed at least seven members of law enforcement escorting the NSM group. In another video by Colucci, one member of the group is seen doing the Nazi salute and posing for photographs while police cars and a cop are seen standing in the background.

Photos on social media showed one member of the NSM group reportedly urinating on an Israeli flag, and many expressed their anger at the police for protecting them.

In Detroit, cops wearing pride flag badges protected Nazis, while local community groups organized to chase them out of Motor City Pride events. The National Socialist Movement were only on scene for 25 minutes and had to leave in a catering van!!

Direct action gets the goods! https://t.co/r41MnZwlYY

Photos show a white nationalist ripping apart a rainbow flag and another urinating on an Israeli flag.

Good people on both sides my ass…. pic.twitter.com/UIiOuCnEm2

I started sobbing when I saw this. I had to rewatch to tell who was who and there's not much difference between the police and the Nazis. I have respect for police, it's just the world's not perfect. We have a ways to go yet.

“The one group (the Nazis) was armed,” Craig said on Monday. “We didn’t want the opposing group to assault them and respond in a way that would be violent.”

According to the Southern Poverty Law Center, NSM is the largest neo-Nazi group in America and is especially known for anti-Jewish rhetoric.