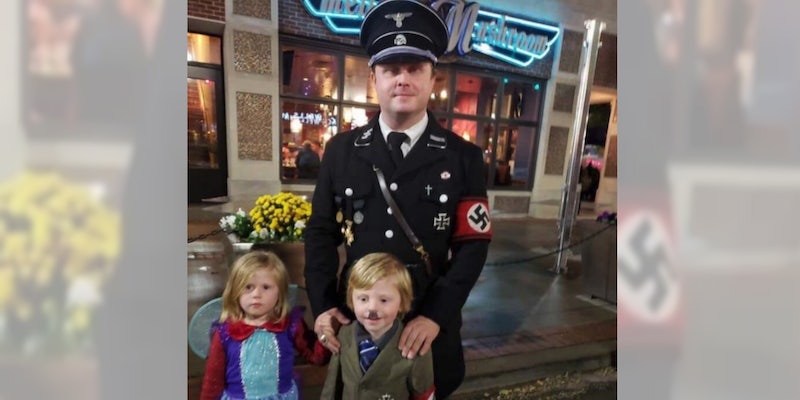 'Yes, liberalism is alive and well.'

A photo circulating on Twitter on Friday showed a man dressed in a Nazi soldier uniform standing with his 5-year-old son, who in a green suit and toothbrush mustache appeared to be dressed as Adolf Hilter.

TriStateHomepage.com reports that the man and his children attended a Halloween event in Owensboro, Kentucky. In a Facebook post shared to Twitter, Goldbach defended the “historical figures” costumes and described receiving threats at the event.

“Anyone who knows us knows that we love history, and often dress the part of historical figures,” Goldbach’s post said. “Tonight as we walked we saw people dressed as murderers, devils, serial killers, blood and gore of all sorts. Nobody batted an eye. But my little boy and i, dress as historical figures, and it merits people not only making snide remarks, but approaching us and threatening my little 5 year old boy … Threatened to rip his outfit off of him screaming obscenities, scareing [sic] a small child.”

As one Twitter user explained, the obvious problem with the costumes are not only who they represent but what they stand for.

“Because it’s not just history, it’s ideology, a sadly vivid one, that throws back to a very dark chapter of humankind history,” user @sup_johnny wrote. “There’s a difference between killing and genocide, dressing up as a Nazi reminds you of the [latter].”

Because it's not just history, it's ideology, a sadly vivid one, that throws back to a very dark chapter of humankind history. There's a difference between killing and genocide, dressing up as a nazi reminds you of the later.

“Yes, liberalism is alive and well,” he wrote. “And we had the dis-pleasure of dealing with the fruits of the so called ‘Tolerant Left.'”

According to TriStateHomepage.com, Goldbach told the outlet “he didn’t realize it would stir as much controversy as is has and apologizes for his actions.”

Goldbach did not immediately respond to the Daily Dot’s request for comment.