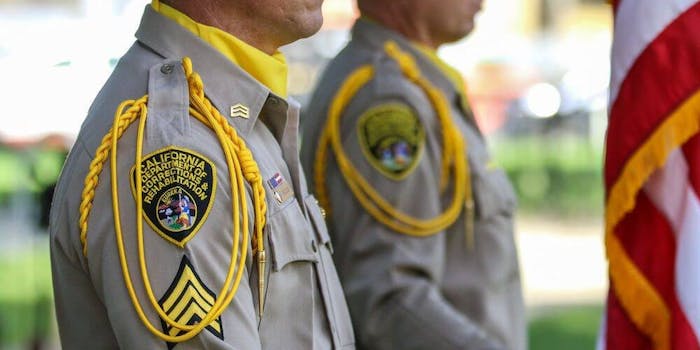 Officers say it was displayed for training purposes.

The California Department of Corrections and Rehabilitation has launched an investigation after a passerby spotted a Nazi flag hanging on the wall of a corrections office.

Michael Johnson was walking past the corrections department’s office in downtown Sacramento earlier this week when he noticed the flag through the window, the Root reports. He initially thought it was part of a distasteful and inappropriate Halloween display, but when he looked closer, he saw other hate symbols and gang paraphernalia.

He took a video of the view into the office, where the flag was hung on prominent display on the wall. “I just don’t think it’s the proper display for a street-facing window,” Johnson told local news station CBS 13. “Right there in front of me was a big giant red flag with a swastika on it and some large SS bolts.”

Parole officers from the office say that whatever it may have looked like at a glance, it was a misunderstanding. They say the display was created as a teaching tool for a presentation on the kinds of hate symbols and paraphernalia that are passed and used around in jails. Why they assembled a teaching tool on the wall of an office is unclear, but it has since been disassembled. Officers also said that the hate symbols were not purchased but confiscated from Sacramento prisoners and parolees.

On Wednesday, the California Department of Corrections and Rehabilitation announced the initial results of its investigation, which found the employee who hung the Nazi flag is “a person of color, and has no ties or affiliation with white supremacy or Nazis.” Regardless of the race or politics of the staff member, the department said the display violated policy. “We are conducting a full investigation into this matter, and are taking aggressive steps to ensure our employees are following policies.”