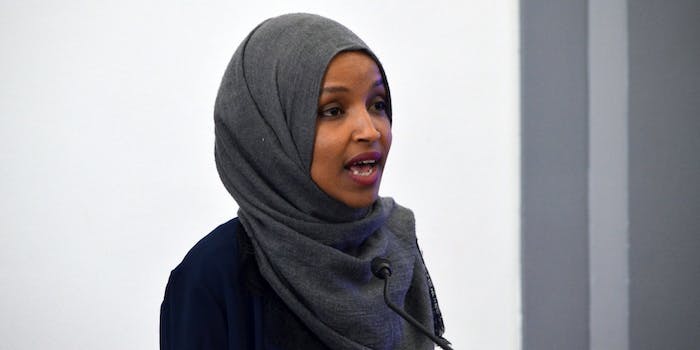 Ilhan Omar supporters balk at her vote on genocide resolution

'You can’t just cherry-pick between humans and human rights.'

Official U.S. recognition of the 1915 Armenian genocide was a cause for celebration for Armenians around the world this week. It has taken years of rallying from Armenian communities and expert demands for the killing of 1.5 million Ottoman Armenians more than 100 years ago to be recognized a genocide.

On Tuesday, the House passed the resolution with a 405-11 vote. CNN journalist Haley Byrd reported that Rep. Ilhan Omar (D-Minn.) was one of the three members to vote “present,” a refusal to take sides. Byrd then shared a statement by Omar’s office about her stance.

” A true acknowledgment of historical crimes against humanity must include both the heinous genocides of the 20th century, along with earlier mass slaughters like the transatlantic slave trade and Native American genocide, which took the lives of hundreds of millions of indigenous people in this country,” her statement said.”

Omar's office has sent this statement to CNN explaining her present vote: pic.twitter.com/Gpj198jx0p

People on both sides of the political aisle were displeased with Omar’s stance on national recognition of the genocide, which has taken decades of rallying to achieve and was previously denied by the Bush administration.

Verginie Touloumian, an Armenian-American who lives in Watertown, Massachusetts, and works for a humanitarian organization, tweeted that it’s “never the right time to compromise our nation’s morality.”

It’s never the right time to compromise our nation’s morality by outsourcing our policy on genocide. Shame on you!

“Honestly, voting a ‘present’ is kind of weird because you’re standing on the sidelines… that to me is a disappointment,” Touloumian told the Daily Dot. “Where people are looking up to you as a human rights activist but you refuse to recognize it.”

Touloumian isn’t alone in her disappointment. Many tweeted that Omar’s reasoning for the “present” vote was insufficient.

I am saying this with a lot of responsibility. America, irrespective of where you are on ideological spectrum- Follow the money trail or you risk being at the whims and fancies of an asset. I

Ilhan Omar's decision to vote present on the Armenian Genocide resolution is shameful. There's no ifs, ands, or buts about it. It's not acceptable. There should be no distinction between her voting present and those who voted no.

It seemed almost no one, on either side of the political spectrum, liked her answer. She was criticized by her usual opponents, but many who usually support the congresswoman also felt her stance was senseless.

I agree. This is some bullshit. It appears that Omar is playing the same politics with this resolution that she accuses its backers of. You can @ me all you want but the truth is that this is a slap in the face to the Armenian people. https://t.co/vvmQQjr5tg

I have no problem saying this as a loyal Democrat.

A Young Turks employee — a company that was named after the people who committed the genocide — said Omar's explanation was a “bad answer.”

Some compared her stance to “All Lives Matter,” referring to critics of the Black Lives Matter movement who try to undermine systematic racism faced by Black communities and co-opt the language to insist “all” lives matter, not just Black lives.

"I refuse to support the resolution against lung cancer unless all other cancers are also included."

Quoting @AlanMCole here, Ilhan Omar just pulled off an epic "All Lives Matter" on the Armenian genocide. She can take all her wokeness and throw it in the nearest wastebasket. Her constant defense of Turkey and refusal to condemn it is seemingly more ideological by the day.

Within a day of the vote on Armenia, new information surfaced about Omar’s relationship with Turkey. Halil Mutlu, co-chairman of a Turkish-American advocacy group and ally of Turkey’s prime minister, reportedly contributed $1,500 to Omar’s campaign last month. Many thought this was evidence that Omar’s vote was a favor to Turkey.

.@IlhanMN Voted today twice in favour of Turkey. She voted against strong human rights votes. One on recognising the Armenian Genocide and the other on sanctions against Turkey for their invasion and ethnic cleansing of Kurds in N. Syria. She has lost a lot of credibility today. pic.twitter.com/csGCLBIri3

Ilhan Omar was the only Democrat who voted against sanctions against Turkey for its genocidal mission against the Kurds. She also decided NOT to vote for recognizing the Armenian genocide. Like all politicians, she only believes in human rights when it suits her. Saw it coming.

On Sept.30, #Erdogan's cousin donated to the campaign of #IlhanOmar, "the only House Democrat to vote against imposing sanctions against #Turkey," which required an assessment of the net worth & income of Erdoğan & his family members, reports @ChuckRossDC.https://t.co/Q5w3GitlEA

Omar touted herself as a voice for human rights against oppression, but it appears she’s going soft on Turkey both with the Armenian genocide and Rojava ethnic cleansing because of a relationship with Erdogan and the AKP. https://t.co/tFThvbvBPL

Ilhan Omar was only Dem to vote against sanctions on Turkey. She abstained on a vote recognising the Armenian genocide.

Last month, She got $1,500 from an official in a pro-Erdogan Turkish-American group which campaigns against recognising the genocide. https://t.co/xQtYgeeGdb

Many people were simply disappointed that a human rights advocate who has vocalized support for Palestine would backtrack on the resolution. Touloumian pointed out that Minnesota, the state Omar represents, had been recognizing the Armenian genocide since 2001.

“Is she choosing and picking the human rights acts she can vote for?” Touloumian said. “You can’t just pick and choose what you’re going to take a stance on. It was an insult to us and the memory of the 1.5 million people.”

If the vote was about a Palestinian genocide, would you vote the same way and give the same reasons?

Yes, the genocide of indigenous people in North America and slavery and even the Nakba should all be recognized too. That doesn’t mean the Armenian genocide should *not* be recognized until they’re recognized. We don’t have to pick and choose our solidarity.

Touloumian said she was an enthusiastic supporter for Omar but thinks this may have pushed away many like her. “In general I’m a supporter of women being in these offices, I know that a lot of my friends who are Muslim did look up to her,” she said. But it might change now. “You can’t just cherry-pick between humans and human rights… it was a very hypocritical move for her and her career.”

The Turkish government has rejected the resolution and called it a “meaningless political step.”