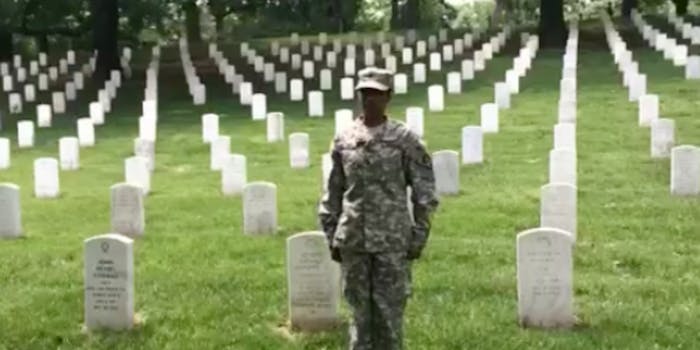 Here’s an awesome Memorial Day Vine from the National Guard

These sorts of social media tributes can be done well with a little creativity, empathy, and imagination.

While brands compete for the most tone-deaf tweets on Memorial Day, the National Guard posted one of the most striking tributes to veterans and soldiers.

A 360-degree view of a soldier is edited to show Arlington National Cemetery and the Vietnam Veterans Memorial, among other locations, in an effort to “Honor those who have stood for our country.”

It’s a reminder not just of what soldiers sacrifice, but also of the fact that sometimes these sorts of social media tributes can be done well, with a little creativity, empathy, and imagination.

However, when those elements are lacking, you get tweets like this:

Take time to enjoy the sweeter things in life today, & to remember those who made the sacrifices for us to enjoy them pic.twitter.com/6LcJfIosi0

Screengrab via the National Guard/Vine