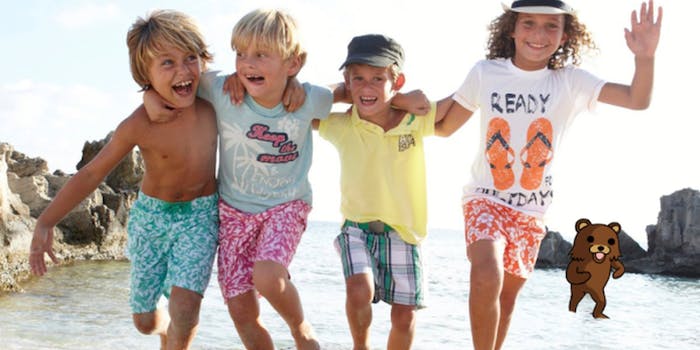 Pro tip: Don't shoot promotional photos on nude beaches. The result is not safe for work, or for e-commerce.

French apparel maker La Redoute apologized today for a photo on its website where, behind happy children modeling its clothing on a beach, a naked man lumbers in the surf.

The man’s genitals are—ahem—barely visible in the original, but can be distinctly seen in enlarged versions of the photo.

Though the company soon took the photo down, French Twitterers immediately created an image macro, and Naked Beach Guy shows every sign of becoming a meme.

“La Redoute apologizes for the photo published on its site and is taking steps to remove it,” a representative for the company wrote on La Redoute’s Facebook page. (This, like all quotes in this story, was written in French and translated with Google Translate.)

Some Facebook users accused La Redoute of intentionally leaving the man in the photo.

“Tell me that it was not done on purpose to create a buzz: D,” wrote Luca Dvs on La Redoute’s wall.

Either way, the nameless man’s naked adventures now extend far past the beach. Here are some examples of his apeparances: