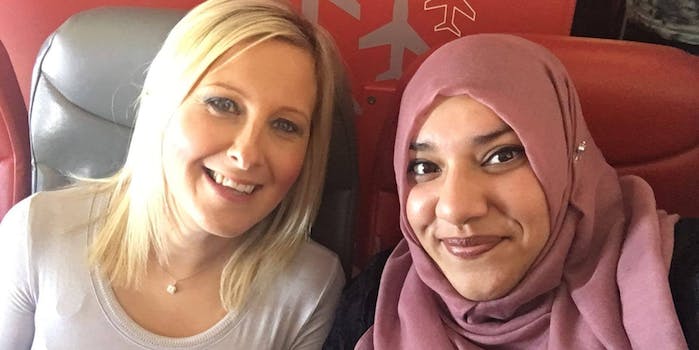 A refreshing story that begins with fear and ends with friendship.

In a shocking twist of world events, a really nice thing happened on a Jet2 flight a couple of days ago.

Jiva Akbor, a Muslim woman, was sitting next to fellow passenger Beverly on a flight from Glasgow, Scotland, to Malaga, Spain. The plane was delayed, so Akbor started catching up on some texts, and at some point texted the word “Allah.” Her aisle buddy Beverly noticed, and Akbor wrote about what transpired on her Facebook page.

Akbor said that Beverly got up and refused to return to her seat, and when she finally did, said, “I saw you write a text message and you wrote Allah on it.” Akbor writes, “This lady was actually scared to sit next to me on this flight and had gone to tell the staff that she saw me write the word ‘Allah’ on a text message and wanted to now change seats—and probably wants me (my now-starting-to-get-a-sick-feeling-of-dread mind was telling me) removed from the flight too.”

However, instead of this turning into another story of a plane being grounded over baseless fears, the two actually talked and worked out their apprehensions and prejudices!

“After about 15 mins of conversation, I could feel her calming down and starting to accept what I was telling her. I rubbed her arm and told her I am not a threat to her. I told her I believe in God and so naturally my conversations often make reference to Him and in written form that is expressed with the word ‘Allah,’” Akbor wrote.

Over the flight, the two became fast friends, and were able to laugh at what had happened earlier. “I encouraged her to take the time to converse with other Muslims, to not believe the scaremongering of politicians and media outlets out there in the world. And we both understood the real impact it can have on two ordinary folks sat next to each other for a few hours on a flight to Spain. I asked her to think for herself and always with the lens of humanity.”

The Daily Dot has reached out to Akbor about the experience, but hasn’t heard back of this posting.

It all just goes to show that keeping an open mind is a good start to dismantling prejudice. If only everyone could have a deep conversation with a patient and understanding person of another faith!