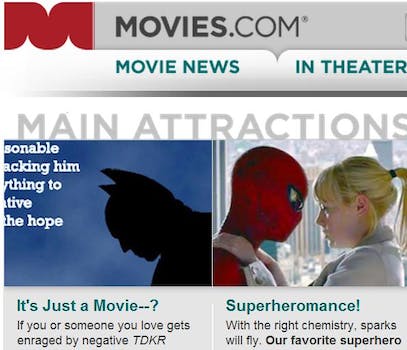 Movie sites respond to shootings, some more appropriately than others

Movies.com goes dark for the day, while Deadline draws criticism for focusing on how the tragedy will affect The Dark Knight Rises at the box office.

While news continues to trickle out about the shootings in Aurora, Colo., news organizations and movie listings sites have come under scrutiny.

And some have dealt with it better than others.

In response to shootings Friday morning at a showing of The Dark Knight Rises, theater listing and movie review site movies.com went dark for the rest of the day out of respect for the victims and their families.

“Our thoughts and prayers are with those impacted by the shooting,” tweeted movies.com managing editor Erik Davis.

While the response to Davis’ announcement was positive, the same couldn’t be said about about a story from Deadline’s Nicki Finke.

At least two other film sites have announcing that they will no longer link to Deadline stories after Finke’s article.

“[J]ust emailed the writers of Collider…we’re done linking Deadline. We’ll mention Deadline if they break a story, but no link,” tweeted Steven Weintraub, editor of Collider.

“We will no longer be linking to @nikkifinke and will only use DH as a source of last resort,” tweeted Film School Rejects. “Integrity counts in this world.#dontlinkfinke.”

The hashtag #dontlinkfinke has since been mentioned 60 times.