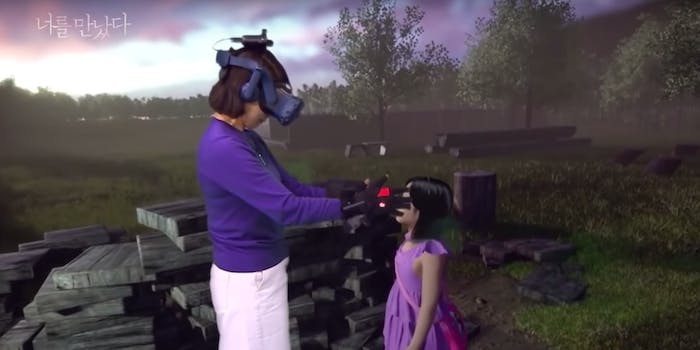 The interaction included a birthday party in the park.

A TV show in South Korea arranged for a mother to touch and hang out with her deceased daughter via virtual reality, according to multiple sources.

On Thursday, Jang Ji-sung interacted with a character based on her 7-year-old daughter Nayeon, who died in 2016. The video shows the mother of four putting on VR goggles and walking around a plain, green background.

The video, which has 7 million views, starts with showing a life-like version of Nayeon running around a virtual field with trees and slabs of wood. Nayeon is in a purple dress. Ji-sung was provided with touch-sensitive gloves and is seen speaking with her daughter as she touches her face and her shoulders, sobbing.

The nearly 10-minute long video was shown in the finale of the MBC Documentary “I Met You.”

One of the most striking elements of the video is watching the interaction in VR before the camera zooms out to show Ji-sung grappling with thin air against the green background. As the video proceeds, crew members behind the scenes are seen tearing up at this emotional interaction.

“Maybe it’s a real paradise,” Ji-sung told Aju Business Daily of the reunion. “I met Nayeon, who called me with a smile, for a very short time, but it’s a very happy time. I think I’ve had the dream I’ve always wanted.”

The interaction also included a birthday party in the park, where the two reportedly have many memories. Ji-sung is seen putting candles on a virtual cake while Nayeon takes pictures of her mother.

The producers worked for eight months to put together Nayeon’s voice, facial features, and body, according to Aju Business Daily. A child’s movement was used to incorporate the movements in the video as Nayeon’s.

Ji-sung wrote on her blog that she wanted to appear in the video to comfort other grieving parents “or who has lost a brother or a parent,” according to Aju Business Daily. Her blog, which attracted 200,000 viewers in the morning after the broadcast, has been shut down.