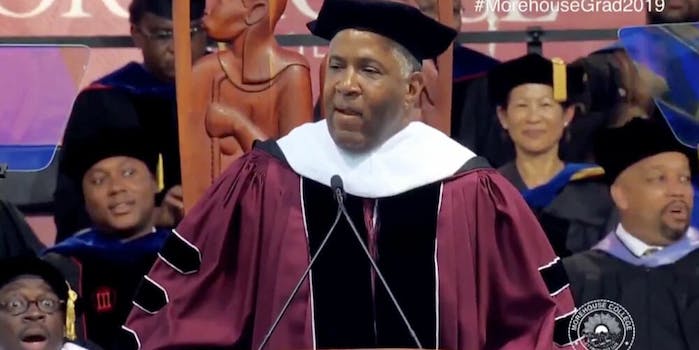 The generous grant has furthered the conversation of the burden of student loans.

Speaking at Morehouse College’s commencement ceremony Sunday, a billionaire investor dropped an announcement that sent ripples of relief among graduating students, and has furthered the national conversation about the burden of student debt.

Robert F. Smith told the nearly 400 graduates of the historically Black college that he was paying off their student loans. The total amount is about $40 million, according to the Associated Press.

Talk about a graduation gift! Morehouse College Spring Class of 2019 Commencement Speaker Robert F. Smith will be establishing a grant to pay off the Class of 2019's Student Loans so they'll be graduating debt free! What a time to be a Morehouse Man! #MorehouseGrad2019 pic.twitter.com/uZ9RGP0RML

“On behalf of the eight generations of my family who have been in this country, we’re going to put a little fuel in your bus,” Smith, who is the founder and CEO of investment firm Vista Equity Partners, told the crowd.

Talk about a graduation gift! Morehouse College Spring Class of 2019 Commencement Speaker Robert F. Smith will be establishing a grant to pay off the Class of 2019's Student Loans so they'll be graduating debt free! What a time to be a Morehouse Man! #MorehouseGrad2019 pic.twitter.com/uZ9RGP0RML

“This is my class 2019, and my family is making a grant to eliminate their student loans,” he said, with everyone from the students to those seated behind him stunned and cheering. The panel of professors and speakers on stage rose to honor his announcement.

“When he said those words … all my classmates’ mouths dropped open. We were speechless,” Kamal Medlock, a Morehouse student who had $80,000 in loans, told NPR. “We were shocked.”

And Medlock is already thinking about paying it forward, as Smith had urged students to do in this speech. Other students at Morehouse also expressed their gratitude online.

Just Graduated from Morehouse College debt free. This just the beginnin. Blessed and highly thankful to be where I’m at in life right now.

I graduate from Morehouse College today , in addition Robert F. Smith is handling class of 2019 student loans! God is real ! I swear. Anyone out there with a dream go for it!! And give back/pay it forward. Inspire those around you . Oh yeah and y’all know I had to do my dance lol pic.twitter.com/nIBpStOomF

Some pointed out that perhaps Smith will inspire other rich folks to do the same.

Smith has definitely set the bar high for commencement speakers everywhere. The mother of a student who was just relieved of an estimated $70,000 in loans told the Atlanta Constitutional Journal that she hopes Smith might be back next year for their other son’s graduation from Morehouse.

This is incredible. And I feel sorry for the next Morehouse College commencement speaker. The bar has been raised REALLY high!!!! https://t.co/I9iWf0AD2g

The person who'll be taking the Morehouse College 2020 Commencement Speech and Address probably has the hardest task ever. Have a debt free week y'all. 😁😉😎 #MorehouseGrad2019 #MorehouseCollege #Morehouse

But mostly, people pointed out that we shouldn’t wait around and rely on a handful of heroes to solve student debt woes. It should be government policy.

A good thing that some students are graduating debt-free, but we shouldn’t content ourselves with relying on crumbs handed out by the billionaire class to a few students. Let's forgive ALL student debt. https://t.co/fWiQYkhGqM

Student debt has been an increasingly dreadful concern among many American students as well as their parents. According to the latest 2019 data, a total of 44 million people are in a collective student debt of $1.5 trillion. It’s also a key talking point in the upcoming presidential elections, with Massachusetts senator and presidential hopeful Elizabeth Warren’s announcement of an ambitious plan that would relieve students of their student debt and make public colleges tuition-free.